The media are in the process of demonizing all White Conservatives as racists, who should pay for the sins of America’s slave-holding past.

In fact, another of the stories we ran today (about racism and the eclipse) references how Cassius Clay renounced his ‘slave name’ and took another name for himself: Mohammed Ali.

He was one HELL of an athlete, nobody can take that away from him … but as far as his history goes, he should have looked a little deeper.

He might have asked, for instance, why the same search results come up when you google the Arabic words for ‘slave’ and ‘black’. Top of the search results for both point to ‘Abeed’.

Seems a strange thing for someone trying to tear away from a slave past to latch onto. 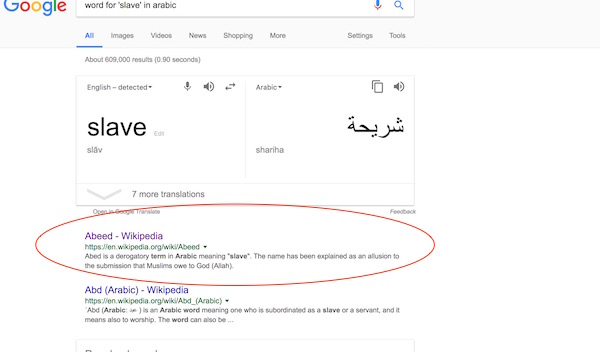 Islam was actually on the SELLING side of the North African Slave Trade. Look up Barbary Slave Trade some time.

Because they were devout. And followed the example of their Prophet of the Sword. Mohammed.

Rodney Stark argues that “the fundamental problem facing Muslim theologians vis-à-vis the morality of slavery is that Muhammad bought, sold, captured, and owned slaves”, though he states that Muhammad did advise that slaves be treated well: “Feed them what you eat yourself and clothe them with what you wear…They are God’s people like unto you and be kind unto them”. In addition, Stark contrasts Islam with Christianity, implying that Christian theologians wouldn’t have been able to “work their way around the biblical acceptance of slavery” if Jesus had owned slaves like Muhammad did. —Wiki

We don’t even need a non-Islamic opinion on the matter. One University Professor of Theology in Egypt sprang to the defense of owning sex slaves… ‘in order to humiliate them’. (Her own words.)

Not only is this Professor defending this practice as ‘lawful’, she is saying that HER religion (have you guessed which one yet?) has IMPROVED general society by establishing specific rules about who may (and who may not) be captured and used as sex slaves.

Which means this ‘mainstream’ professor is not so different, really from the monsters in ISIS that capture, rape, and sell women into bondage.

Still confused? Let Tucker Carlson explain it to you:

And when will the Left start denouncing this?