Aw… the poor little babies.
Was the big bad President MEAN to them after months and months of their ridiculous hysterics?

It looks like the New York Times reporters are upset.

Is it just me or do these folks look like this? 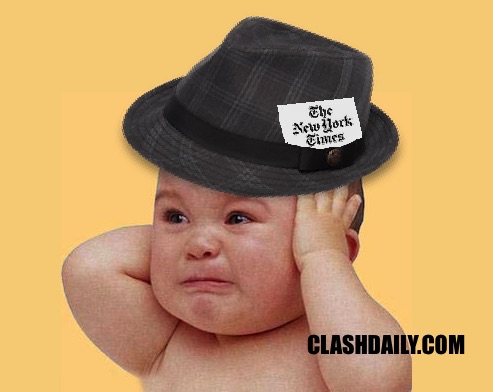 These little crybabies have no sense of proportion.

The same people who sing the praises of Obama the Lightbringer conveniently forget they once said this:

These actions – the prosecution of leakers and the targeting of journalists – were unprecedented in scale and severity, and they were criticized heavily in the media. The New York Times editorial board called the attack on Rosen a sign that “the Obama administration has moved beyond protecting government secrets to threatening fundamental freedoms of the press to gather news.” —USNews

They carry on as though President Trump is some new and emerging threat against a free press.

No… a ‘threat against a free press’ looks different. It looks more like this:

So when you bitch and moan about how big a problem Trump is when you’ve spent months trying to undermine and discredit him, with bogus stories, whisper campaigns and revolting accusations of racism, why are you upset when he hits back?

You only pretend to be REPORTING the news… but what you’re really doing is advocacy. You’ve become the Propaganda arm of the Democrat party. 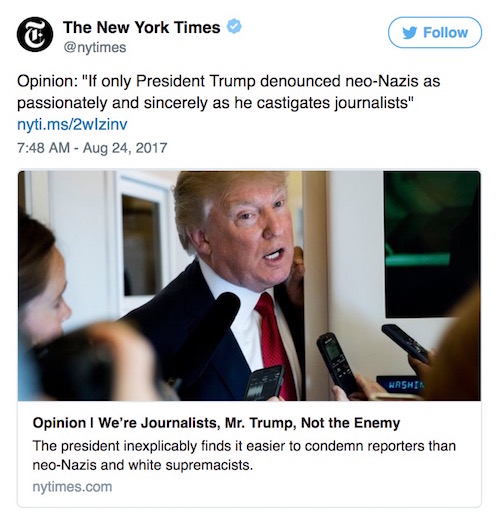 When Trump was a Democrat, do you notice you guys never accused him of being a Racist? Why is that? Oh right… now Trump is the enemy.

The press is free to twist the truth and Trump is free to call them out on it.

If the media were to report the news accurately, then @realDonaldTrump wouldn't have harsh words for them. B honest or deal. #fakenews

They didn’t even get any love from the Bernie Bros:

Agreed….Imagine if "journalists" had written truth in 2016 instead of narrative for ratings. Your integrity might be intact. ~ Berners

Are you trying to gaslight the American people? there videos of him doing this everywhere- maybe you should watch the news?

No, they’re too busy writing stories to pay attention to what’s actually going on. The narrative won’t write itself, you know!

If Trump can be called out for not denouncing the Democrat’s pointy-hatted bastard child loudly-enough… can’t we ALSO demand the Left speak less lovingly about domestic terrorists?

Your ‘both sides’ accusation cuts both ways, genius.

Also ironic is that all the power the media has been ascribing to them, and the Intersectional Feminism they are touting are breathing life and credibility into a movement that was already limping along on life support. If they had just ignored them, their movement might have died a slow and ignoble death. (But then, who would Antifa use as the justification of their riotous outrage?

Sorry for the mental image… but she’s not wrong.

If he was castigating @nytimes, he wasn't castigating JOURNALISTS. You clowns are nothing more than LIBERAL PRESStitutes, legs open for $$!

No, you're not journalists. You are propagandists. You deliver a biased perspective on everything from news to sports.

It must be so very hard being a journalist for the New York Times.

The price you’d have to pay in the loss of self-respect alone boggles the mind.