Looks like mom and dad gave some really good advice.
Even if they didn’t realize the SCIENTIFIC reason why it was such good advice.

There are some common-sense values that should be axiomatic.

(The number of Hollywood elites in rehab should be proof enough of that one.) 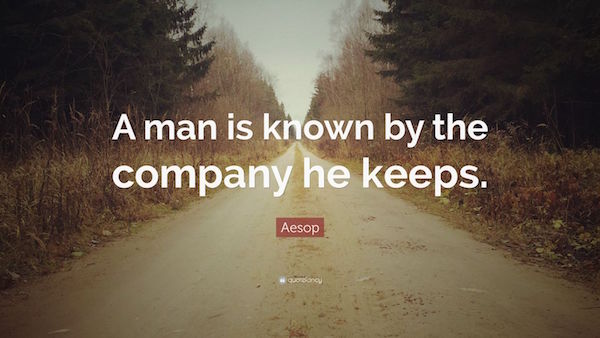 A neuroscientist sheds some unexpected light on why both of these things are true.

Better still, he gives great advice on how to be happy — backed by science!

According to Moran Cerf, a neuroscientist at Northwestern University who has been studying decision-making for over a decade, the surest way to maximize happiness has nothing to do with experiences, material goods, or personal philosophy.

It’s all about who you decide to spend time with. But “it’s not just advice to choose your friends carefully,” Cerf told Business Insider.

There are two premises that lead Cerf to believe personal company is the most important factor for long-term satisfaction. —Business Insider

A great deal of research has found that humans have a limited amount of mental energy to devote to making choices. Picking our clothes, where to eat, what to eat when we get there, what music to listen to, whether it should actually be a podcast, and what to do in our free time all demand our brains to exert that energy on a daily basis. —Business Insider

Premise two: the small daily choices have less impact on our overall happiness than we think.

The truth is, decision-making is fraught with biases that cloud our judgment. People misremember bad experiences as good, and vice versa; they let their emotions turn a rational choice into an irrational one; and they use social cues, even subconsciously, to make choices they’d otherwise avoid.–Business Insider

So what IS of key importance?

He argues it’s the ‘company we keep’.

Research tells us that as we spend time in someone’s company, our brain waves will eventually resemble each other. It’s a principle, he says, that can apply to Thoughts, Emotions, a d Activities.

“The more we study engagement, we see time and again that just being next to certain people actually aligns your brain with them,” based on their mannerisms, the smell of the room, the noise level, and many other factors, Cerf said. “This means the people you hang out with actually have an impact on your engagement with reality beyond what you can explain. And one of the effects is you become alike.”–Business Insider

Ever have someone walk into the room and have the mood change entirely in reaction to the mood they brought with them — for better or worse? Then you’ve experienced what he’s describing.

So his counter-cultural advice is not (necessarily) to double-down and try harder in changing aspects of life you would like to change.

Instead, he’s saying you should find someone who already possesses the qualities you would like to develop.

From those two premises, Cerf’s conclusion is that if people want to maximize happiness and minimize stress, they should build a life that requires fewer decisions by surrounding themselves with people who embody the traits they prefer. Over time, they’ll naturally pick up those desirable attitudes and behaviors. At the same time, they can avoid the mentally taxing low-level decisions that sap the energy needed for higher-stakes decisions.

…The same can apply for people who want to exercise more, watch less TV, take up a musical instrument, or become more sociable. In all cases, Cerf said, the most important decision is who you surround yourself with. —Business Insider

So, rather than beating yourself into submission, you could just hang out with the kind of people you’d like to be more like.

Where did we hear this advice before?

Sounds a little like that quote: “Bad company corrupts good morals.” — that was written in a book somewhere, wasn’t it?

What do you think? Is he right or ridiculous?