Recently, a whole new generation of Americans got to enjoy the idea of what it might be like if someone actually dropped a nuclear bomb on America. People googled things like…What would it be like if a nuclear bomb exploded in Chicago, New York or Los Angeles? Or How to survive a nuclear blast?

Pretty terrifying stuff to say the least. I actually did a little research to see if we knew what size megaton bomb Kim Jong Un might actually have at his disposal. Then I tried to figure out if my family would be within the blast radius if it hit Chicago. I hadn’t thought like that in years.

I grew up afraid of Russia bombs. I was a kid in the 80’s. It was the height of the cold war. Reagan was our steely eyed leader and he stared right back at the Russians. We all knew about missile silos and red buttons and how many minutes it would take to incinerate all of us. Terms like “Mutually Assured Destruction” were known by middle schoolers. It was a scary time and I really thought we might be nuked any day.

Eventually, the Soviet Union collapsed in great part due to our arms race and the masterful bluff from Ronald Reagan that was SDI (Strategic Defense Initiative) or Star Wars. SDI was designed to research and build a space based missile defense system to take away the Russian threat of missile annihilation. In the 1980’s Star Wars technology was years away. It’s not anymore. We already have some fantastic battle tested missile defense systems and the technology is only getting better.

In May, ABC reported that America successfully intercepted and shot down an ICBM or Inter Continental Ballistic Missile, the kind of which would deliver most nuclear weapons to the mainland of the United States. Reagans SDI dream is now a reality. It’s time to fund it and create a real and true Ground Based Missile Defense System (GMD).

Everyday more crazy dictators and ISIS type zealots are trying to gain access to nuclear weapons. The more that happens, the more we need a functioning GMD system for the United States. There is no better place to spend money than where it would actually protect American cities from nuclear explosions. 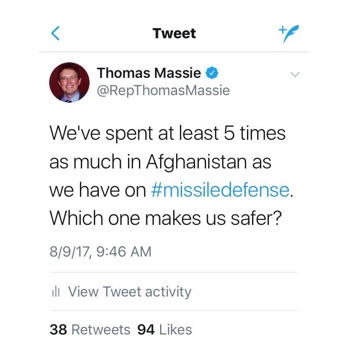 Representative Thomas Massie summed up the importance of financial allocation clearly with his recent Tweet. Missile defense programs have gone underfunded for years. If New York was hit with an ICBM with a nuclear warhead we would be very sorry that we didn’t place a larger importance on missile defense. The devastation would dwarf 911.

Americans should demand both land based and space based missile defense become a priority and a reality. The technology is here, but is our will?

Currently, only California and Alaska have missile defense systems in place. It’s time to cover the entire nation with a level of protection that is second to none from any type of incoming missile launched from rogue nations, super powers, or just your average terrorist.

Speaking about the successful test, Vice Admiral Jim Syring, director of the U.S. Missile Defense Agency said, “This system is vitally important to the defense of our homeland and this test demonstrates that we have a capable, credible deterrent against a very real threat.”

Also, our THAAD (Terminal High Altitude Area Defense) system has worked in tests. In July, THAAD successfully shot down a target over Alaska. It is designed to intercept short and intermediate ballistic missiles and launches from mobile trucks. It’s no longer science fiction.

We can shoot down a bullet with another bullet.

It’s time to watch Democrats, Independents, and Republicans come together for the safety of our people. What party wants to be one who allowed the destruction that would accompany a nuclear blast hitting the coasts or the heartland? Hopefully, none of them want that on their heads.

Missile defense is real and we need much more of it. Kim Jong Un just proved how badly we need it.