CNN’s White House correspondent was using the press briefing on Immigration reform to lecture one of President Trump’s advisors. How’d that work out for him? Glad you asked.

It was a Q&A Presser for the new Immigration Bill that Trump is backing, and Miller said he had time for one more question.

Chronic grand-stander that he is, Acosta took that to mean Miller was offering time for an extended argument, a monologue, and a fake history lesson with a CNN ‘journalist’. And so Acosta with his typical ‘grace and charm’ launched into a heated debate with Miller.

Acosta, of course, is sooper-speshul, and better than all those OTHER reporters from other news outlets, because he represents the Chattering Narcissist Network.

We could describe it to you. But it’s better to just let you watch it.

Yes, it really IS that good.

Oh, Acosta. Do you even REALIZE he made you look like a dope? 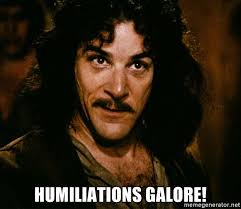 Where was this outrage from the Media (D) when Barry ditched Wet foot/Dry foot in those waning days of his administration? (Presumably as retaliation for the Cuban Americans in Florida that voted overwhelmingly for Trump.)

If Acosta is so interested in debating policy rather than reporting events, maybe he should run for the Democrats?

Here he is being called out on exactly that on Twitter. Acosta – because the story has to be about HIM, not the policy – is STILL going on about it.

If you’d like to see the whole thing, you can grab yourself a cup of Covfefe or Liberal Tears and watch the full White House Press Briefing here:

He gave a pretty good smackdown to an NYT reporter too.

I hear they were formerly a newspaper.

Don’t let anyone grow up to be a whiny beeyatch like Acosta.

If you see anyone who needs a nudge back in the right direction, or an inoculation so the young bros don’t get gelded by college feminists, put this in their hands.