Isn’t this more serious than yelling ‘you lie’ to Obama?

There was a media frenzy when Joe Wilson yelled ‘you lie’ at President Obama.

It was an uproar. An outrage. He was rebuked by the House for it. Made to apologize.

For saying something that was later proven true.

Obama’s health care promise WAS based on a lie.

But that was way back before the world changed; before the Left started to accept violence as an acceptable political practice.

Now, we have an elected official openly longing for the murder of an American Citizen whose politics she disagrees with.

But it’s worse than that. Sen. Maria Chappelle-Nadal (Missouri State Senator from University City) put THIS on her personal FaceBook page:

The senator says she was wrong to write the post but says she will not resign.
She had written “No. I will. I hope Trump is assassinated!” in response to a comment on Facebook.
She told the St Louis Post-Dispatch: “I didn’t mean what I put up. Absolutely not. I have deleted it, and it should have been deleted. —BBC

Does anybody ELSE see the irony here?

What was she so heated about in the first place?

So incensed was she that Trump denounced hatred and bigotry, while calling for unity on the day of the riot there, and later denounced white supremacy by name, that she wanted to see him dead.

Because she was angry about his WORDS, she would gladly see him dead.

Considering someone actually DID die as the result of inflamed tensions that day, she should be less flippant about the value of ANY human life.

She was angry that Trump called attention to the fact that another group … a European Import that has been starting riots here for months … came to the event with clubs, mace, masks, and all sorts of evidence of ‘malice aforethought’.

To say the violence and hatred was explicit ‘one group’ is to lie. And it is to ignore the reports of eyewitness reporters:

It later got ‘sanitized’ to fit the narrative. But that was a reporter on the scene’s original, gut reaction.

Beating on someone you’ve never met before with a club you’ve brought with you specifically for the occasion? Hate seems the better word for it.

And there was THIS little wrinkle:

The Charlottesville ‘KKK/Fascist Leader’ Was An Obama Supporter

Does that change the story at all?

What did Trump call for? He denounced violence on BOTH sides and called for the nation to unite.

He had already called out the KKK. And White Supremacists. And all the rest of them.

It’s what leaders are SUPPOSED TO DO. Unless they have an ax to grind or profit to be made by pitting one group against another.

There are countries in this world where government leaders get shot if someone doesn’t like them. But as HILLARY reminded us all in October, America is about Democracy and the peaceful transition of power.

“The way I responded this morning was wrong,” she told The Star. “I’m frustrated. Did I mean the statement? No. Am I frustrated? Absolutely. The president is causing damage. He’s causing hate.”

Is HE the one causing hate? Whose death has TRUMP called for?

Just this year, we’ve had a BernieBro shoot at, and nearly kill a Republican Congressman, and others. We have a VOCAL Anti-Trumper execute his Republican neighbor with two rounds to the skull, and we’ve had an attempt on Trump’s own life during the campaign.

She spoke as someone who wants Trump DEAD for his WORDS. But she wants to merely ‘retract’ the fact that she’d welcome his murder, and keep her job.

How can someone who says this be morally any different than the jerk who drove his car over Heyer?

In her heart, she’s not. They BOTH devalue human life the same way. 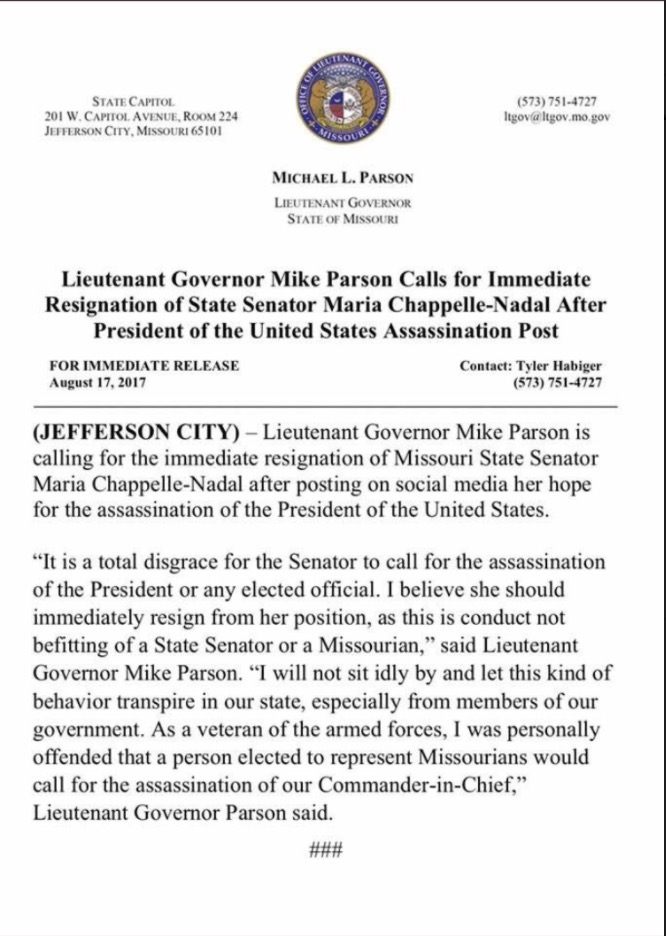 “I am not resigning. What I said was wrong, but I am not going to stop talking about what led to that, which is the frustration and anger that many people across America are feeling right now.” — Kansas City Star

She’s scrubbed the assassination call and said it was wrong, but is still refusing to apologize.

Even DEMOCRATS are calling for her resignation.

Trump’s great sin was ‘incorrectly’ denouncing hate, whatever that means.

She claims Trump makes it ‘easier for racists to be racists’. Is that what THIS looks like?

…no matter the color of our skin, we all have the same laws, we all salute the same great flag, and we are all made by the same Almighty God.

We must love each other, show affection for each other, and unite together in condemnation of hatred, bigotry, and violence.

We must rediscover the bonds of love and loyalty that bring us together as Americans.

We at ClashDaily would like to offer the counterclaim that she’s lying about racism, and her failure to denounce violent Leftist extremists is making it easier for thugs and killers to justify their violence. And it’s not just us.

Stephen Webber, chairman of the Missouri Democratic Party, agreed that Chappelle-Nadal should resign.

“State Sen. Chappelle-Nadal’s comments are indefensible,” Webber said. “All sides need to agree that there is no room for suggestions of political violence in America — and the Missouri Democratic Party will absolutely not tolerate calls for the assassination of the president. I believe she should resign.” — Kansas City Star

This is serious. She’s one more person that has called for the assassination of President Trump.

We’ll just add her name to the already long list: