Celebs held a telethon to raise money for hurricane relief after the devastation of Harvey and Irma. Some of them just couldn’t resist lecturing the ‘climate deniers’ and lectured away. Oddly, not a one of them addressed THIS glaringly obvious hypocrisy…

The leftist Hollywood elites made sure to lecture people about man-made (anthropogenic) climate change and how Hurricane Harvey and ‘Supercane’ Irma were caused by running air conditioners, driving cars, and reliance on ‘fossil fuels’.

It was pretty bad.

Almost as bad as Al Gore’s sequel to ‘An Inconvenient Truth‘.

Beyonce said that it’s ‘impossible’ to turn on the news and not hear about ‘violence’ and ‘racism’ — and now, natural disasters!

Queen Bey obviously doesn’t understand what the role of the news plays — it reports what is happening. Unfortunately, the ‘good news’ stories don’t get the eyeballs, so they’ve gotta add some sizzle and find the things that make people want to watch. No one tunes in to hear, ‘And in today’s news, people were nice to each other.’

Stevie Wonder said that if you don’t believe that climate change as real, you’re either ‘blind or unintelligent’.

I know what you’re thinking, dear Clash Reader, but please…

Anyway, the fundraiser was quite successful, if a bit tedious. It was on 4 networks, NBC, ABC, CBS, and Fox Broadcasting. It attracted 16 million viewers, and, kudos where it’s due, they managed to raise $44 million dollars for relief.

Can’t help but notice that all these folks lecturing about ‘global warming’ or ‘climate change’ or whatever it’s called these days, they’re the ones with the big houses, sometimes several of them, private jets and entourages that travel with them.

So, if you’re a believer in man-made climate change, as Stevie Wonder spoke about, shouldn’t you do something about it?

It’s all good and well to tell the ‘little people’ to carpool to work or take public transit, but that’s a drop in the bucket to what these jet-setting stars could do.

Justin Bieber is calculated to have travelled at least 136,000 miles in a plane over the last year, environmentalist DiCaprio is believed to have done more than 87,000 miles while fellow actor Clooney did 61,000 miles.

Carbon emissions from plane journeys such as the celebrities’ cause the earth’s temperature to heat and the resulting higher ocean temperatures lead to more powerful hurricanes. The higher temperatures over land and sea mean the storms generate more energy.

Justin Bieber was at the top of the list for ‘carbon polluters’.

Trips to Germany, Dublin, Paris, Cape Town, Mumbai, Rio de Janeiro and to his homeland Canada meant he clocked up a staggering 136,947 air miles burning through 22.45 tonnes of CO2 since September 2016.

The average annual carbon dioxide emissions per person in America is 20 metric tons, compared to a world average of four tons.

His flights alone have put him over the average American consumption, and that doesn’t include fuel for cars or energy use for homes — let alone the carbon footprint of one of his concerts.

Staunch environmentalist Leonardo DiCaprio has been jetting across the globe around twice a month in the past year.

The 42-year-old actor flew around 87,609 miles on various business trips and jaunts around the world which burned up 14.8 tonnes of carbon dioxide.

He famously flew into Washington D.C. in April to protest with ‘climate change’ activists on Trump’s 100th day in office.

ClashDaily has consistently questioned Leonardo DiCaprio’s commitment to climate change as he lectures others about it while he does nothing to change his extravagant lifestyle.

And we’ve been doing so for a long time:
‘ECO WARRIOR’ LEONARDO DICAPRIO: Flew On A Private Jet from NY to LA 6x in 6wks

This video sums it up:

VIRAL: The ‘Leonardo DiCaprio Is A COMPLETE Idiot’ Video Is PURE GOLD!

We’ve also given Leo props when he does the right thing:
Look How Much Cash DiCaprio, The Kardashians, Miley & Others Are Giving To Harvey Relief Efforts

And Mr. We-Don’t-Need-A-Border-Wall-But-I’m-Suing-Reporters-For-Scaling-My-Fence-And-Photographing-My-Children Clooney is no saint.

George Clooney spent around 61,448 [miles] in the air since September last year which included a long trip to Italy this summer.

He is thought to have flown 4,265 miles from Toronto to Los Angeles to attend Tuesday night’s Hand in Hand: A Benefit for Hurricane Harvey Relief telethon at a cost of 720kg of CO2.

His total air time meant his carbon emissions from flying alone was 10.31 tonnes of CO2.

Meanwhile, despite being pregnant with twins, Beyonce still managed to clock up 28,040 miles in 12 months burning through 4.55 tonnes of CO2.
Source: Daily Mail

These people are private jetting all over the place and using the equivalent of an average American’s CO2 consumption for the year on their flights alone.

And some of them have multiple homes, fleets of cars, and travel on luxurious yachts that don’t run on rainbows and good wishes.

These are the same people that denounce the oil industry and want to stop our reliance on fossil fuels.

They’re not going to stop their reliance on fossil fuels, but you need to.

And really, this is all about an agenda.

This has been going around on social media, and we’re not sure where it origniated, but it’s the right way to sum everything up, I think.

Thought For The Day………

Since 1850, Florida has experienced the wrath of 119 hurricanes.
However; only the last one, Irma, was due to climate change.

(or, because America preferred Trump over Hillary….depending on which liberal looneytune you’re listening to) 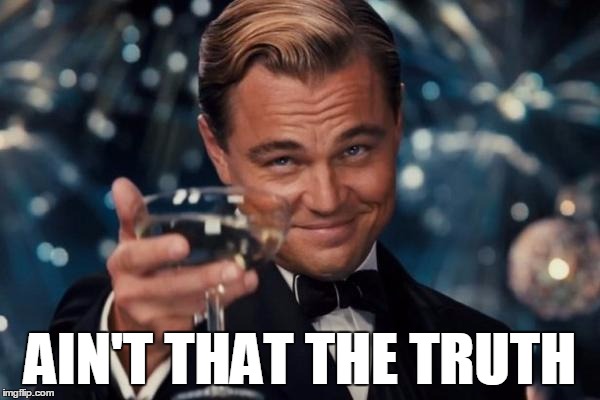