Who could it be? 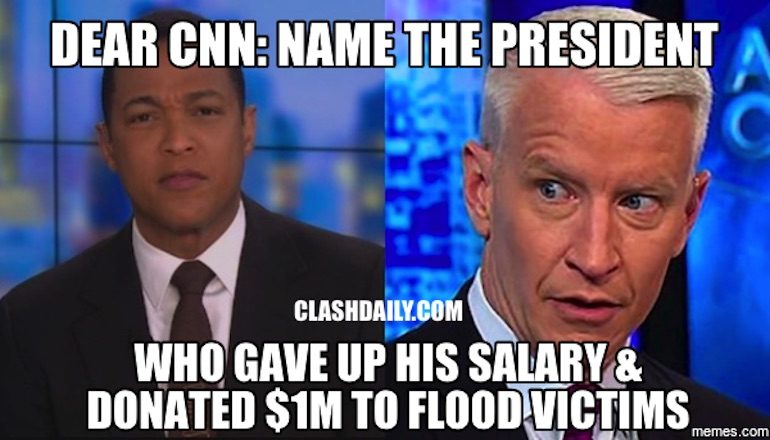 They’re so busy cooking up stories about how he’s ‘betraying his country’ (to the Russians, or for personal gain), or lacking in compassion that they are incapable of seeing the real news.

‘Flyover country’ isn’t surprised, though. We still remember how Trump visited Louisiana after the flooding there, while Obama golfed, and Hillary went to fundraisers.

The same media that endlessly praised the Clinton Foundation for its ‘good work’ (despite all sorts of red flags concerning ‘pay to play’) scandals has the words catch in their throat when it comes time to report anything positive Trump might be doing.

The same media that tried to claim ‘product placement’ about his wearing his trademark cap on his visit to Texas, as though he was trying to personally profit off of tragedy, will NOT be running his million-dollar private donation to relief efforts as their lead story.

Because they’ve got their knives drawn.

If they could pull off a coup-d’etat themselves, they would.

But we’re supposed to treat them like they’re reporting ‘news’. Objectively.

And the ‘media deserves our respect’ and to be treated ‘like professionals’.

Aren’t elected officials, businessmen and yes, even Presidents ‘professionals’ too?

They’re too busy writing their next hit piece.