***EDITOR’S NOTE: Bryan isn’t just a Green Beret and a well-spoken hero, he’s also a Purple Heart recipient. We are grateful for his service to this great country and his razor-sharp cultural commentary.

We’ve got some entitled, unappreciative, pompous, cause-seeking, multi-millionaire athletes protesting the Anthem in the name of “equality” or to protest the president or whatever. Laughable. The people protesting literally make more money in a year than most people see in a lifetime, employ people to run their lives, raise their kids, and tell them how great they are.

And then we have Ms. Olivia Wilde coming onto the scene with her emotionally moving endorsement of the Anthem protests. “The sports community is brave and serious about taking real risks to defend essential American values. We should all be so bold. #takeaknee”

I’m dying!…defend??? What does that even mean? Defend, you mean like brave service members overseas putting their own life on the line for their values, beliefs, and opinions?

Serious???……for what? Some BS position they likely have no vested interest in to begin with? Yes, if you’re wondering, I’m questioning the motives of those people who employ publicists and brand marketing people for their “image.” FYI, Taking a knee is easy. I’ve seen plenty of lesser men do it. They do it while the hard chargers continue forward with the weight of the weak on their shoulders.

Risks? Taking a knee during the Anthem is your definition of a risk? My idea of risk is taking effective fire, kicking in doors, running towards gunfire, driving down IED infested roadways, danger-close call for fire, and the list goes on. The biggest thing these players risk is a grass stain on their costume. (Real athletes wear uniforms.)

People die for that flag, plain and simple. If our Anthem doesn’t matter to you, then you don’t matter to me.

Now, Olivia, I wouldn’t be a bit surprised if you yourself have taken a knee a time or 2 for a football player but we are talking about them kneeling during the National Anthem here. I’m not sure anyone cares that another Hollywood millionaire with no real grasp of reality has flocked to a popular issue. It must be nice to have all that extra time in your incredibly rough life to sniff out trendy social issues. Your stance is about as inspiring as your role in Cowboys & Aliens.

This is the last thing I’ve got, and its just sort of a personal observation. When I got to an NHL game (best sport of all) everyone stands, players, coaches, staff, refs, fans, everyone. To take that a step further, when you go to an NHL game and a Canadian team happens to be playing and their Anthem is sung, everyone still remains standing followed by an arena-shaking with the sound of cheering. Why do you ask?….cause it’s a real sport, all the aforementioned people know the meaning of respect and they aren’t assholes.

Speaking of ‘Taking A Knee’ for your country, here’s what it really looks like: 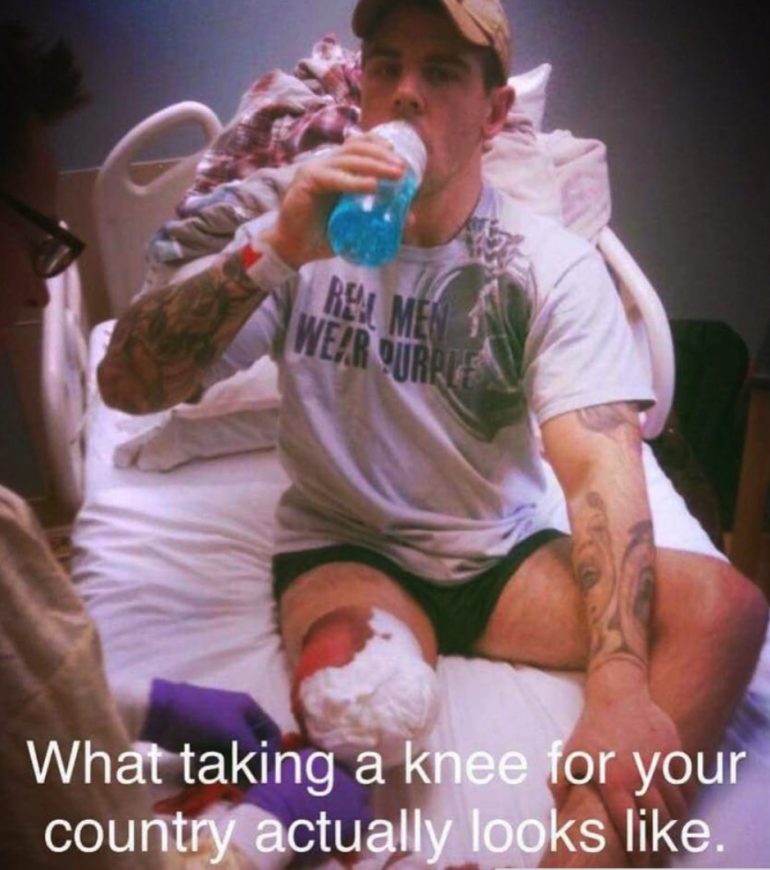 Check out Doug’s latest vid regarding the ‘Take A Knee’ clowns: