With one announcement, the ‘novelty league’ of women playing football in pads and skimpy clothes is suddenly the CLASSY football league.

Remember how people were ‘outraged’ when the Lingerie League first came into play?

They took a lot of heat in the beginning for not being ‘legitimate’.

Mostly, it was about the ‘sexist’ uniforms.

Funny enough, a lot of these same people would speak glowingly about recently-deceased Hugh Hefner.

Not everyone has a problem with the uniforms, though. Some even embrace it:

But some players, like lineman Nneka Nwani, enjoy wearing the LFL uniforms. “While I was playing college basketball I was kind of depressed that I had to dress like a boy. I want to be an athlete, but I also want to be a woman. I believe that a jersey and shorts hide everything that’s powerful and beautiful about my body. My body is majestic. It’s gorgeous and it’s admirable and I love to be able to show it off.” –ESPN

We don’t expect she’d get a lot of disagreement with the ‘majestic’ comment, either: 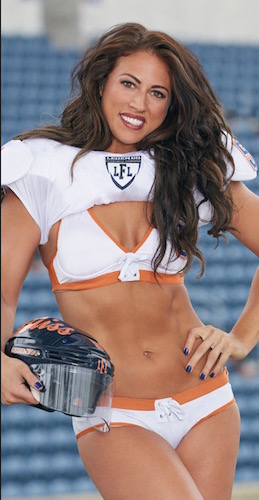 So, how did this ‘novelty’ league with cartoonish-sounding team names (names like ‘Bliss’, ‘Charm’, ‘Sirens’, ‘Temptation’, and ‘Dream’) suddenly leapfrog the NFL in the Class department?

Besides  having real-deal hard-hitting football — the league has come of age — they are smart enough NOT to declare war on their fans.

What was the NUMBER ONE issue of the week? The Anthem.

What did LFL have to say about the Anthem?

Their press statement was pitch-perfect.

They will NOT be participating in the ‘taking a knee’ protests.

“The LFL recognizes everyone’s First Amendment right to protest, but our nation’s flag and anthem are far too sacred,” the league said. “Too many fellow Americans have made the ultimate sacrifice, so that our flag and anthem continue in all its majesty.”

…”It symbolizes all the blood, sweat, and tears that have been shed so that we as Americans can raise our flag across our nation,” the organization says during the video. “The LFL salutes all those who make this the greatest country in the world.”

“We stand in salute of our flag.”

Maybe the NFL will pay attention to the video, AND the fan reaction to it.

As for the gameplay itself? Is it ‘legit’? Are they to be taken seriously as athletes? They sure think so:

More easily, you can spot the veterans. They have mouthpieces firmly clenched, scowls etched into their faces, ankles taped, long hair tied up in buns high atop their skulls, shuttle from one activity to the next without hesitancy or lack of understanding, and speak in curse-laden dialects that wouldn’t be out of place in a bachelor party’s 12th hour. Tessa Berrara, a brunette Texas import who plays lineman on offense and linebacker on defense, is the loudest. “We’re switching again,” she shouts to a newbie who wants to know why they’ve stopped the drill, “because we’re fucking dynamite!” — SBNation

And they’re not alone.

“The talent level has 100 percent improved since when I started in the league [in 2011],” Ziegler told Metro. “We’re real athletes that just happen to wear a lot less clothing than the majority of sports. We wear just as much clothing as beach volleyball players, just as much as swimmers. But if you tune in, you’ll see some real athletes playing the sport of football. That’s what we’re about.” Metro

Look! It’s the awkward moment that the ‘chick league’ has more moxie than the pampered millionaires in the ‘real league’.

And if you want to send a message to the NFL? How about this one?