President Trump has done it again. He’s outraged the Media (D) by retweeting another GIF.

This one is pretty awesome.

Not that the one of President Trump wrestling CNN isn’t awesome.

After all, it spawned a Meme War.

How many weeks do you think they’ll spend analyzing this new GIF?

Maybe they’ll suggest that ‘Russian Hackers’ were somehow involved. That should get them another week’s worth of commentary.

Here is a screenshot of President Trump’s retweet: 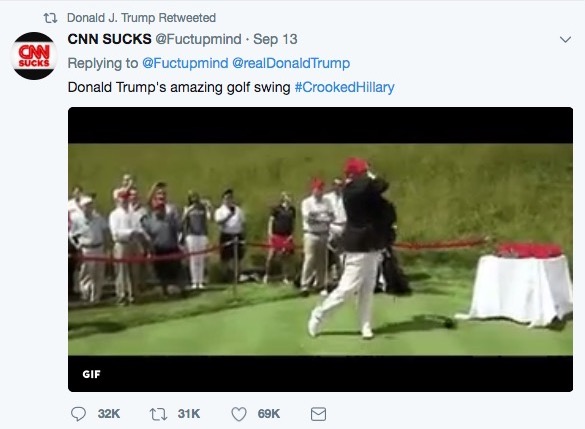 And here is the GIF itself:

You can just imagine that there was outrage!

CNN made sure to comment on it. No word on the recently changed Twitter handle to ‘CNN SUCKS’, though.

The animated GIF image Trump retweeted spliced together footage of Trump taking a swing on a golf course with footage of Clinton tripping and falling as she boarded a plane in 2011 as secretary of state. The footage is edited to make it appear as though Clinton is hit in the back with a golf ball before her fall.

The tweet revealed a President still reverting to his old social media habits, namely, those likely to earn him quick criticism, less than two months after retired Gen. John Kelly took over as White House chief of staff.
Source: CNN

And anti-Trumper Stephen King had his say:

Trump thinks hitting a woman with a golf ball and knocking her down is funny. Myself, I think it indicates a severely fucked-up mind.

This from a horror writer.

He probably regrets the tweet after what it got him.

It was only a joke. I grew up reading your books & they woke my dark humor, too. I wish u would try to meet him, at least. Hillary is evil. pic.twitter.com/DQUudXWAY6

What do you think of the President retweeting GIFs?

Is it a big deal and ‘unPresidential’?

Or does it show that he uses social media like the rest of us?