As usual, the President attempting to implement his agenda has caused outrage on the Left. The tweets are venomous and profanity-laden. But hey, that’s just the Hollywood elites voicing their displeasure.

The latest outrage is due to President Trump’s position on Deferred Action for Childhood Arrivals (DACA).

DACA was a controversial Executive Order issued by President Obama to allow children that entered the country illegally to have some semi-legal status, freedoms to pursue higher education and employment, and immunity from deportation.

As with all government programs, leftists and ‘moderate’ Republicans sought to expand DACA and use it as a pathway to amnesty.

DACA is seen by many on the right as the Executive Branch usurping legislative authority and putting in place a permanent program that allows individuals to knowingly violate immigration law.

There is a human factor to consider with DACA, to be sure.

However, we cannot pass legislation based on emotion.

It is the failure of the Obama Administration to not bring forward legislation to protect individuals now covered by DACA if it was so important.

But it’s a way to dump on Trump and his supporters.

And the Leftists in Hollywood are keen to do that.

Danny Zuker, the Executive Producer of the show Modern Family is using the rescinding of DACA to call out Christians. 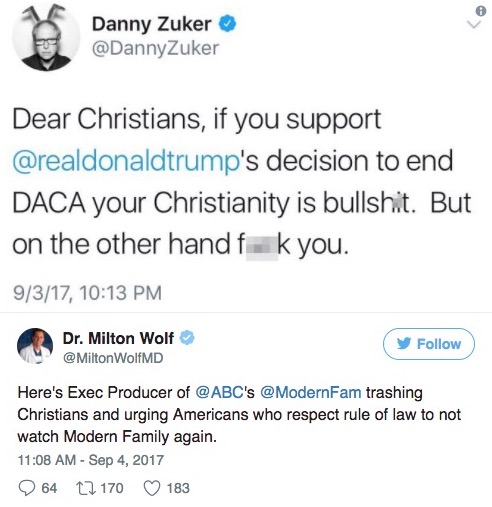 Because it’s always a good idea to call out people on what your idea of their religion is, amirite?

And perhaps we could oblige him.

Zuker, (whose existence I didn’t know about until 10 minutes ago,) deleted his original tweet but then doubled down.

Is President Trump ‘literally’ doing that?

Or is he ending a controversial Executive Order by an authoritarian President and forcing Congress to do its job?

Perhaps its the values of SOME that want the rule of law upheld?

It seems that permitting families to cross the border illegally and giving them ‘sanctuary’ status is putting them in the position of being ‘torn apart’.

As much as leftists want us to, we cannot simply erase immigration law.

The whole immigration process is a mess and needs a good overhaul.

I personally think that President Trump is doing what needs to be done with regard to immigration. 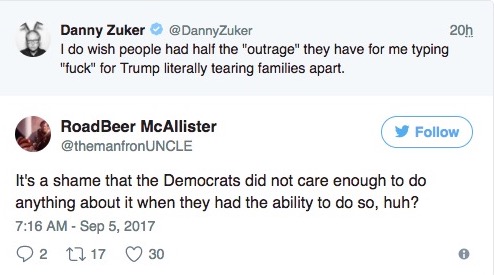 Seriously, what is wrong with these people?

Do they not get that Romans 13 is also part of Christian belief?

1 Let every person be subject to the governing authorities. For there is no authority except from God, and those that exist have been instituted by God. 2 Therefore whoever resists the authorities resists what God has appointed, and those who resist will incur judgment.

We don’t expect you to be theologians here, but a basic grasp would be nice.

Is that a lack of compassion to obey the law?

Is the DACA situation a sticky one?

But really, that’s the fault of Leftists pushing their ‘Open Borders’ policies and allowing people to flout the law.

It’s ridiculous to get angry when a President comes in and wants to actually enforce the rules on the books.

But I’m thinking that foul-mouthed Zuker probably won’t get that.

Are you going to boycott Modern Family?