For some reason, they thought this would be a clever idea.
They wound up looking like losers.

Why should FOOTBALL get all the race-baiting disruptions?

Why shouldn’t they call out a team sport that led the way in racial integration?

Maybe they haven’t heard about some guy named Jackie Robinson. 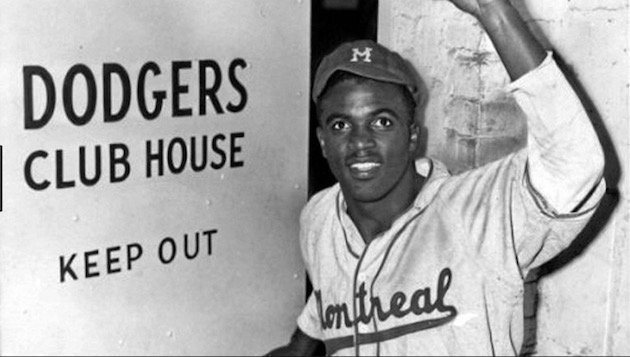 No, they’re too busy trying to politicize a game that fans go to in a desperate search for a break from our hyper-political world. 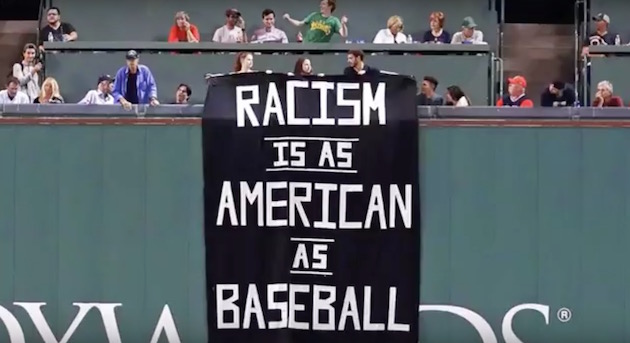 It was not well received.

Security quickly confiscated the banner and removed those holding it. pic.twitter.com/b8xjLBW8O5

“There’s no place for that,” Red Sox outfielder Mookie Betts told reporters of the banner. “That’s for another day, though.”

Per ESPN’s Marly Rivera, third base umpire Joe West and Boston police officials worked in conjunction with Fenway Park security to remove the fans holding the sign from the stadium.

The fans unraveled the sign and displayed it on the Green Monster in left field after the top of the fourth inning. McCaffrey noted the sign “hung for a couple of minutes” before security were able to pull it down. –Bleacher Report

None of them admitted which activist groups they belonged to, but they claimed they all belonged to groups setting out to ‘dismantle white supremacy’.

Must be a really great group if you won’t even admit belonging to it. Antifa, was it?

The activists slid up to seats they didn’t even pay for and asked if they could sit there for a minute.

The fans said sure, not knowing the activists were planning to unfurl a sign. A sign, that the fans behind the Green Monster couldn’t even see.

From their position behind the sign, the front-row patrons couldn’t read it. Nonetheless, as soon as they heard a chorus of boos from around the ballpark and saw reactions from field personnel, including third base umpire Joe West and Athletics players who were crossing the field, Ryan and his friends were distressed.

“They hung it out there and all the boos came in. We said, ‘That can’t be good,’ ” said Ryan. “We’re vets. We don’t want no [bull] out there. So I asked [one of the women in the group] at least three times clearly, ‘What does the sign say?’ She wouldn’t even turn her head to look at me. I said, ‘That’s cowardly. You won’t even tell me what it says.’ ”

While Ryan and his friends had not been able to read the sign while it hung in the ballpark, once they learned of the message that had been displayed, they became incensed.

“If we had known earlier [what the sign said], it would have come up a lot earlier. We would not have tolerated what they said if we’d known before security came,” said Ryan. “What they’re trying to say is America is racist. That’s what they’re trying to tell us — we’re racist. We’re not. Plain and simple. Sure, there are racist people here, but Boston being flagged with this racist tag . . . we don’t need that.” —Boston Globe