People pay to watch him play sports, not play games. So when Curry played ‘do I? don’t I?’ over a gesture of respect for an accomplishment… the President let him have it.

There’s enough Drama in Washington already without adding some grandstanding athlete to the mix. So Trump dealt with it. Have people not figured out that people are tired of politics bleeding into everything?

*update*
Golden State has now tweeted a response, below: 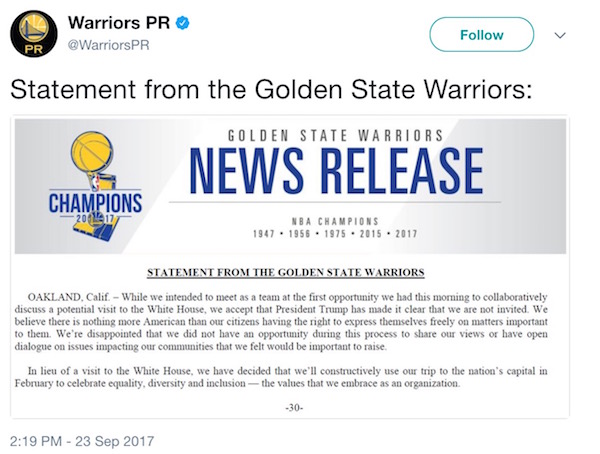 Having Professional Championship teams show up to the White House is a tradition. It was intended as a show of respect, a tip of the hat, to a big accomplishment in the field of athletics.

Leveraging something that was intended as a way of Honoring the team into a political message is kind of classless.

If an athlete doesn’t want to be involved, fine. But to get on a soapbox and hammer the guy who is honoring your teammates? Pretty classless. Just because YOU don’t appreciate it, doesn’t mean someone else won’t.

“I don’t want to go,” Curry told reporters on Friday. He said in June he “probably” wouldn’t go to the White House, and this week said he didn’t think the team should go either. —The Hill

Go or don’t go, whatever. But at least be a man about it. Don’t dither like some sixth-grader trying to figure out whether he wants to ask little Sally out to the dance. We don’t have time or patience for a multi-millionaire’s self-absorbed drama.

It was a chance to accept recognition for a job well done, moron.

Not an invitation to play a game of political hot potato.

No problem. It’s no longer an issue.

Going to the White House is considered a great honor for a championship team.Stephen Curry is hesitating,therefore invitation is withdrawn!

And here’s the reply from ClashDaily’s Big Dawg, Doug Giles.

(Curry might want to be wearing his cup for this blast!)

A couple of big names from the NBA have weighed in, too.

U bum @StephenCurry30 already said he ain't going! So therefore ain't no invite. Going to White House was a great honor until you showed up!

And Kobe, maybe someone who had to settle with a woman who accused him of rape, while admitting that she did not believe she had offered consent (the actual definition of rape) should think twice before offering this criticism:

You didn’t think we had fogotten about THIS, did you Kobe?

I also want to make it clear that I do not question the motives of this young woman. No money has been paid to this woman. She has agreed that this statement will not be used against me in the civil case. Although I truly believe this encounter between us was consensual, I recognize now that she did not and does not view this incident the same way I did. After months of reviewing discovery, listening to her attorney, and even her testimony in person, I now understand how she feels that she did not consent to this encounter. —Wiki

Before you guys keep shouting your politcs, you might want to ask your NFL buddies how their ratings have been doing.
49ers’ Ticket Prices PLUMMET – Also, Look How Many MILLIONS NFL Stands To Lose!

Share this with someone who’s tired of Millionaire athletes crapping all over America.