Of course it is. The perpetually outraged have to be outraged, amirite?

The Alpha Phi sorority at the University of New Hampshire is coming under fire after a video went viral on social media of the white girls singing along to a Kanye West song and shouting the n-word.

Members of the Alpha Phi Sorority were shown in the Snapchat footage Tuesday afternoon dancing and singing along to Kanye West’s 2005 rap hit ‘Gold Digger.’

They belted out to the lyric ‘she ain’t messing with no broke n****’ – and are now facing a furious outrage from critics who accuse them of racism.

Here is the problematic chorus:

The post read: ‘A member of Alpha Phi Sorority put up this video of girls singing along to Gold Digger by Kanye West on her Instagram story. The girls sing the n-word without thinking of the implications.

‘This is a showcase of ignorance and that the Panhellenic Council should do better in combating racism. The first step is addressing willful ignorance. #RacistUNH’

Watch the video that caused the outrage:

A member of Alpha Phi Sorority put up this video of girls singing along to Gold Digger by Kanye West on her Instagram story. The girls sing the n-word without thinking of the implications.This is a showcase of ignorance and that the Panhellenic Council should do better in combating racism. The first step is addressing willful ignorance. #RacistUNH #UNH University of New Hampshire

Some comments on the post said that the whole thing is making a mountain out of a molehill and it’s ridiculous.

Others agree that it is certainly racism.

‘This isn’t about freedom of speech, it’s about making the 92% of white students at UNH more socially aware so that people of color feel more comfortable, welcome and safe at UNH,’ one user wrote in the comments section.

‘It is literally up to you, the students, to make sure UNH is more welcoming. It doesn’t matter how you feel about this song or these girls singing it if you’re white, it matters how POC view UNH based off the examples set by its students.’
Source: Daily Mail

The University is reviewing the matter and hadn’t reprimanded the girls (yet) because they believe in the right to Free Speech.

Alpha Phi has sent a letter to the UNH community apologizing and asking to not have an investigation. 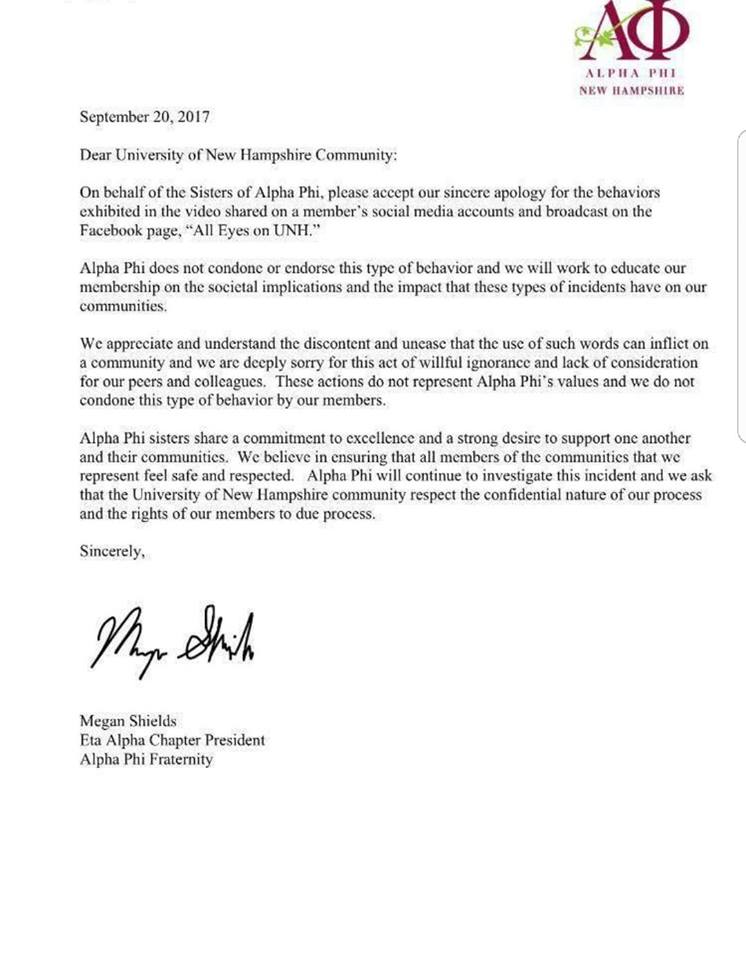 Piers Morgan pointed out a few things about this story, and he doesn’t condemn the girls singing.

First, he takes a look at the song by Kanye.

In 2005, Kanya released the song ‘Gold Digger’, with guest vocals by Jamie Foxx. It rocketed up the Billboard Hot 100 chart and stayed at Number 1 for 10 weeks — it was the second-longest at the top spot that year, and the sixth highest of all time. ‘Gold Digger’ won the Grammy in 2006 for the Best Rap Solo Performance and nominated for Record of the Year. It was also the fastest selling digital download of all time.

To sum up –it was one of the biggest hits of the Millenium.

Even by the pathetically easily offended snowflake standards of modern day US campuses, this is ridiculous.

How can it possibly be racist to sing along to a song that was No1 in America for TEN WEEKS?

And is the word ‘nigga’ racist anyway?

We all know that.

That’s why I won’t even spell it out.

The NAACP has condemned the use of both words, but many black people consider it ‘cultural appropriation’ and only find it inappropriate if used by someone of a different race, others only find it offensive if it is a white person directing it to a black person.

Morgan points out that even black celebrities disagree on the distinction.

Comedian Chris Rock, in his routine ‘Niggas vs. Black People’, distinguished a ‘nigga’, which he defined as a ‘low-expectation-having mother-f****r,’ from ‘a black person’.

By contrast, the late Tupac Shakur distinguished it thus: ‘N****rs was the ones on the rope, hanging off the thing; niggas is the ones with gold ropes, hanging out at clubs.’

No wonder, then, that white people may be even more confused as to whether ‘nigga’ is actually a racist or offensive word.

Larry Wilmore seemed to embrace and legitimize the term when he called President Obama a ‘nigga’ at the White House Correspondents Dinner.

When Larry Wilmore called Barack Obama a ‘nigga’ at the White House Correspondents Dinner, I read several defences by black journalists explaining that ‘n****r’ is a slur against black people, whereas ‘nigga’ just means ‘buddy’.

As such it can be used by anyone, black or white.

With that lack of consensus, it’s no wonder people are confused whether the word is acceptable or not.

Surely a bunch of Sorority girls can’t be called racist for singing along to a ridiculously popular song, can they?

Morgan says that the blame is misdirected:

They didn’t write the song, Kanye West did.

They didn’t make millions of dollars from that song, Kanye West did.

He used the word ‘niggas’ in his lyrics because that is what almost every rapper in America now does.

It’s become a standard, almost compulsory word to include in any ‘cool’ rap record.

He sums up here:

These Alpha Phi Sorority sisters did nothing wrong.

If you want someone to blame, then blame Kanye West.
Source: Daily Mail

Please make a decision on whether or not that particular word is racist.

If it is, then rappers need to stop putting it in songs.

If they decide it’s ok for black people to sing it but not anyone else, that’s racist.

If they do put it in a song anyway, then no one should get upset that white people sing along.