Multiple people killed and many more were injured in Manhattan this afternoon.

DeBlasio is calling it a Terror Attack.

The suspect was shot, and is now is in custody.

Here is an official statement from DeBlasio.

The diver of the Home Depot pickup truck drove the wrong way down a bike lane near the 9/11 memorial and ran over two people.  According to witnesses, it then crashed into a school bus. 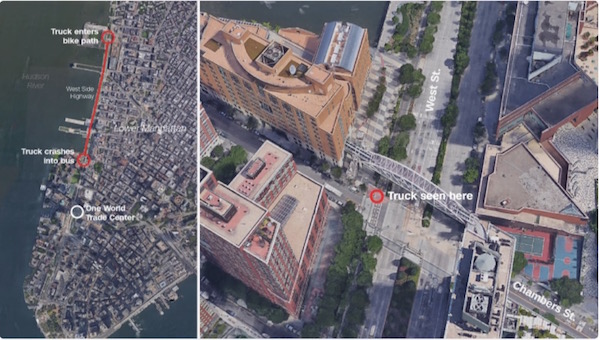 Eyewitnesses are reporting that the man that was driving the truck exited the vehicle, shouted ‘Allah Ackbar’ and began shooting at people. (It was later reported that the two ‘guns’ he was brandishing after he got out of the truck were a pellet gun and a paintball gun.)

As of the time of publication, it has been reported that between 6 to 8 people have been killed and 15 are reported injured.

The incident is being investigated as a terror attack.

A man in a pickup truck killed six people when he drove onto the West Side bike path in lower Manhattan Tuesday afternoon — and then shouted “Allahu Akbar” as he got out of the car with fake guns, police sources said.

The attack happened around 3:15 p.m., when a man in a flatbed pickup truck from Home Depot veered onto the bike path at West St., a few blocks north of Chambers St., police said.

The suspect, who was shot by police, then plowed his car into multiple people on the path, killing up to six and injuring several others, according to cops.

Information is still being released.

Here is an image of the truck and the first responders on the scene:

He continued driving south and hit another car, then got out and displayed “imitation firearms,” police said.

The man then shouted, “Allahu Akbar,” according to police sources.

Witnesses described a scene of terror, as people fled for safety.

Some raw video from the scene:

https://t.co/KOk075kdmP terror attack in Manhattan on the ground footage

There was additional confusion because this occurred on Halloween.

“Jesus! A car just ran over 2 people and then crashed into a school bus. I see two dead bodies and citibikes on the floor destroyed,” a Twitter user wrote.

“What happened was there was a car crash… he came out of one of the cars. He had two guns,” a 14-year-old Stuyvesant HS student said. “We thought it was a Halloween thing. He started running around the highway. There was another guy in a green shirt that was chasing him around.”

Oh my god I just heard gun shots and ran with my dog. Downtown. Fuck.

8 people have died in an act of terrorism in New York City, NYPD Commissioner James P. O’Neill said in a live press conference