Some people really are just that stupid.

So, when you have a friend who achieves a major life goal, do you…

(C) Give them a guilt trip?

Well, for ONE sociopath, the answer is a solid ‘C’.

But it boomeranged. HARD. 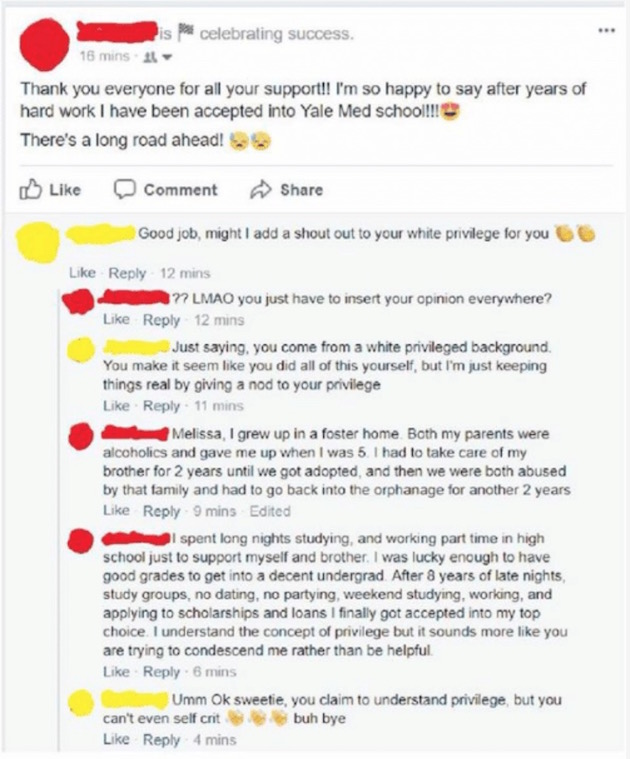 Since the names are obscured, we’ll just use red and yellow to identify the speakers.

Red: Thank you eveyone for all your support!!! I’m so happy to say after years of hard work I have been accepted into Yale Med School!!!
There’s a long road ahead!

Yellow: Good job. Might I add a shout out to your white privilege for you

Red: ?? LMAO you just have to insert your opinion everywhere?

Yellow: Just saying you come from a white privileged background you make it seem like you did all of this yourself, but I’m just keeping things real by giving a nod to your privilege

Red: Melissa, I grew up in a foster home. Both my parents were alcoholics and gave me up when I was 5. I had to take care of my brother for 2 years until we got adopted, and then we were both abused by that family and had to go back into the orphanage for another 2 years.

I spent long nights studying and working part-time in high school just to support myself and my brother. I was lucky enough to have good grades to get into a decent undergrad. After 8 years of late nights, study groups, no dating, no partying, weekend studying, working, and applying to scholarships and loans I finally got accepted into my top choice. I understand the concept of privilege but it sounds more like you are trying to condescend me rather than be helpful.

Yellow: Umm, Ok sweetie, you claim to understand privilege, but you can’t even self-crit. buh bye.

And this is why privilege is a bogus term.

We’ve got girls like this one who had to slog through hell to claw their way to a ‘normal life’ will be called ‘privileged’.

But others with a silver spoon in their mouths — say, the Obama girls — will not.

Would this be a bad time to mention that Ivy League schools are a really dumb place to invoke the ‘privilege’ argument? Maybe they missed this story? LMAO: Ivy-League School Gets BUSTED For Bizarre Racist Application Policy

You want to raise girls with the kind of drive and tenacity that this Brand New Med Student has?