Since everything ELSE is ‘racist’, why wouldn’t we expect THIS to be ‘racist’ too?

It’s perfectly ‘fine to sell (and, presumably, wear) a Cheeto-colored mask of the President.

He’s a public figure, and all. So he’s fair game. And the Obama masks were fair game, too.

So why wouldn’t OTHER public political people inspire costumes, too? 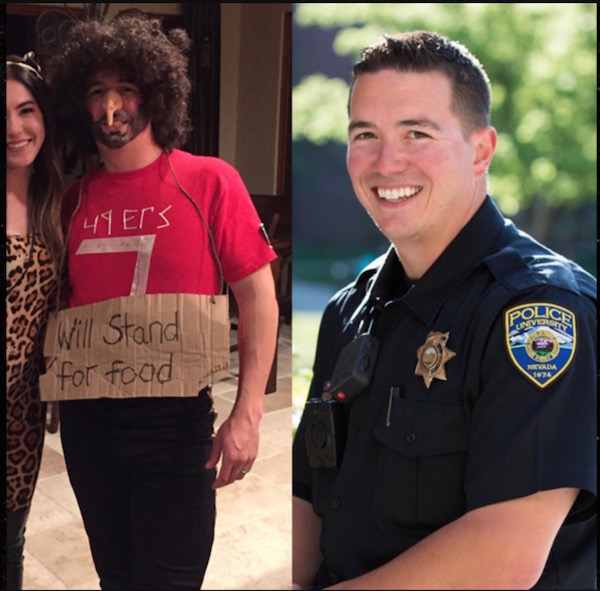 The has-been quarterback can slander the police and claim they’re modern slave patrols with impunity. But if a cop makes fun of Colin? Well don’t you know…

And, predictably, there was outrage:

‘Hey @unevadareno! one of your officers, Antonio Gutierrez, decided to go as a racist portrayal of #Kaep last night. this isn’t ok,’ said the original poster of the side-by-side photos. They had found the incriminating photo traversing through social media.
‘The fact that everyone in these comments that’s saying it’s not offensive is white… making my blood boil man. Y’all have no idea,’ said one user.
Source — DailyMail

And of course, the Police Chief was quick to be politically correct about it.

Police Chief Adam Garcia apologized for the image on Sunday after the slew of Twitter comments on the photo.
‘For those who have seen the Halloween costume of one of our officers apparently mocking a citizen who has chosen to take advantage of his constitutional right to protest, I offer my sincere apologies,’ Garcia said in a statement.
He would not confirm if the man pictured in the costume was Gutierrez.
‘Members of our profession are held to a higher standard and denigrating another – on or off duty – is insensitive for its lack of respect and lack of understanding on how others may negatively view their actions and may be impacted.’
Source — DailyMail

So, Pro athletes, on company are free to ‘protest’ any way they like, including insulting or even slandering their paying fans.

But a cop — who he has been slandering — is ‘wrong’ in exercising his ‘free speech’ by mocking Colin.