Would this excuse be taken seriously if it were given by some nameless punk? But he’s a Hollywood A-lister, so that’s different.

Spacey is one HELL of an actor, to be sure. But this is a serious allegation. Will this be the story that breaks opens the floodgate of more abuse in Hollywood?

Corey Feldman has been claiming that pedophilia is rampant in Hollywood.

So has former child star and still successful actor,
Elijah Wood, though he has made some clarifying statements after his quotes were taken out of context by media organizations.

And Roman Polanski is still hailed as a hero despite drugging and sodomizing a thirteen-year-old girl, in something Whoopi Goldberg had the nerve to claim was not ‘rape-rape’.

Will rampant Hollywood Pedophilia be the next shoe to drop? Will this be taken seriously after Hollywood has turned on serial sexual harasser and abuser Harvey Weinstein?

In an interview with BuzzFeed News, Rapp is publicly alleging for the first time that in 1986, Spacey befriended Rapp while they both performed on Broadway shows, invited Rapp over to his apartment for a party, and, at the end of the night, picked Rapp up, placed him on his bed, and climbed on top of him, making a sexual advance. According to public records, Spacey was 26. Rapp was 14.

For years, Rapp, now 46, told no one about his experience, and he has never spoken with Spacey since. But as Spacey’s star began to rise through the 1990s and 2000s — including a Tony Award, two Oscars, a decadelong run as the creative director of the Old Vic theater in London, and six seasons and counting on the hit Netflix series House of Cards — Rapp’s frustration, anger, and incredulity with the sexual boundary he said Spacey crossed with him grew as well. Seeing Spacey now, “My stomach churns,” Rapp said. “I still to this day can’t wrap my head around so many aspects of it. It’s just deeply confusing to me.
Source — Buzzfeed 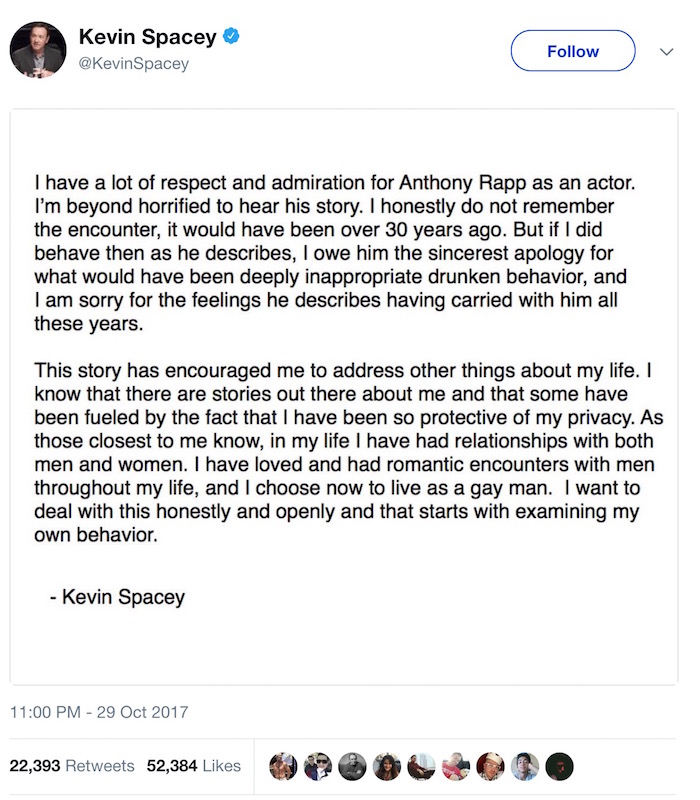 And a perfectly reasonable counter-question:

Would we accept ‘I don’t remember’ or ‘I was drunk’ as a tolerable excuse for anyone else accused of sexual assault? Especially of a minor?

It does raise the unexpected question, though — who is going to be more outraged?

People denouncing child abuse?
Or the Rainbow crowd offended by him saying he ‘chose’ to live as a gay man?