It’s the end of the road for men who thought they could leverage wealth and power to abuse women.

Remember when Hillary said that victims should be ‘heard, believed and supported’? 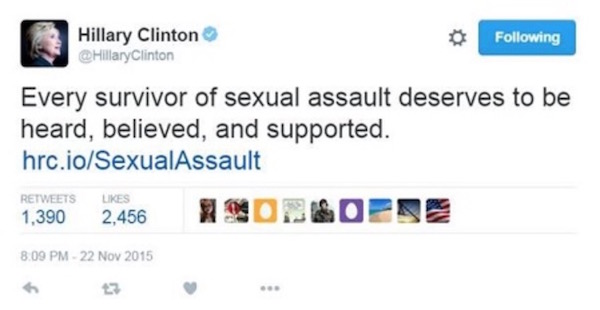 Much was said about BILL making that tweet embarrassing for her. Nobody was talking about how her big-dollar Hollywood buddies might be uncomfortable with it, too.

But with Weinstein, the dam has broken.

And others have been emboldened to speak out.

The people who once pimped them out can’t count on their silence anymore.

That ‘War on Women’ wasn’t happening out there in Flyover Country. It was right there among of  the ‘Progressive’ and ‘Enlightened’  Hollywood Elite.

My truth.I wasn’t in a girl group. I was in a prostitution ring.Oh & we happened to sing & be famous. While everyone who owned us made the $

Strong words. But she’s not done yet. Not even close.

I want the den mother from hell to confess why another 1 of her girl group girls committed suicide?Tell the public how you mentally broke us

Why don’t we report it? Because we are all abused! I personally have been warned if I tell I will … you know end up dead or no more career

How bad was it?people ask-bad enough that I walked away from my dreams,bandmates&a 13 million dollar record deal.We knew we were going to#1

She’s back, and looks ready to fight.

The children you messed with that survived the abuse, we are adults now.Are you ready old ones to fight?Cause you all are looking mighty old

To be apart of the team you must be a team player.Meaning sleep with whoever they say.If you dont they have nothing on you to leverage

Yes I said leverage. Meaning after they turn you out or get you hooked on drugs they use it against you.Correct.Victimizing the victim again

Think she’s just speaking about the people she worked with? Not at all.

I told press in Hollywood about my abuse & they did nothing. I’m still dealing with Vegas. Talk about back to back. Vegas&Hollywood man ????

So where were the media?

Back then, they were too busy telling us how evil George Dubya Bush was. You know, the guy the now find ’eminently reasonable’ because he isn’t in a position to drive policy.

She’s taking a swipe at all the people who put themselves and their careers above the health and safety of pretty and impressionable young women.

Stand strong, Kaya, there are a lot more on your side than you think.

Not all of us are willing to tolerate Hollywood Values.

<share>Share if you want to see ALL of the abusers and enablers — male or female — exposed as the disgusting pigs they are.</share>