Where are Jimmy Kimmel’s tears when they can be put to good use? Maybe the jackwagons demanding restrictions on guns could demand change HERE, instead.

Here’s some food for thought for everyone who thinks it’s a good idea for the Government to be in charge of our health care.

Remember the FBI system for making sure guns don’t get into the hands of the ‘bad guys’? It turns out there are a few … ‘hiccups’ … in the system. Ok, it’s more than ‘hiccups’. SNAFUs, maybe? Or should we just say the whole system is FUBAR?

The FBI’s background check system is missing millions of records of criminal convictions, mental illness diagnoses and other flags that would keep guns out of potentially dangerous hands, a gap that contributed to the shooting deaths of 26 people in a Texas church this week.
Source: Stars and Stripes

And all those NRA haters? They’ll be shocked to know that they are the ones pushing for the system to be corrected. Which — in contradiction of a typical gun grabber’s nasty rhetoric — means it’s not THEIR hands who ‘have blood’ on them.

The FBI said it doesn’t know the scope of the problem, but the National Rifle Association says about 7 million records are absent from the system, based on a 2013 report by the nonprofit National Consortium for Justice Information and Statistics. That report determined that “at least 25% of felony convictions . . . are not available” to the National Instant Criminal Background Check System maintained by the FBI.

…The government funded a four-year effort beginning in 2008 to try to estimate how many records existed of people who should be barred under federal law from buying a gun but aren’t flagged in the FBI system. That effort was abandoned in 2012 because of the cost.

Reforms were abandoned because of COST?

But they were somehow able to find a literal plane-load of cash to drop in Iran’s lap? No, Barry, we’re calling bulls–t on this one.

And what happened to that famous tear? 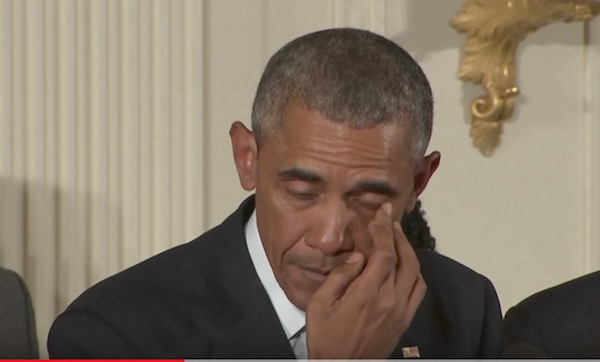 Remember when those Democrats were calling for Republicans to ‘Do Something’?

It turns out there WAS something that could be done. But Obama was too busy fundamentally changing America to make it a priority.

The National Rifle Association has complained that the federal database is inadequate. The powerful gun rights lobbying group opposes calls for more restrictions on gun buying, arguing that the government should focus instead on making its current background-check system fully functional.

“The shortcomings of the system have been identified, there just seems to be a lack of will to address them,” said Louis Dekmar, president of the International Association of Chiefs of Police.
Source: Stars and Stripes