Needless-to-say, this negative affect is deceptive and most unfortunate.

One year has passed since Trump was voted into office by 2600 counties out of 3100. As a businessman – an entrepreneur – he has proved to be the action-oriented achiever in office that he was in business. He’s a man obsessed with getting things done and achieving his goals: Making America Great Again – Putting America First.

Of course he has found that it is more difficult in government to achieve – to accomplish – to get the right things done – than in business. Nevertheless, Trump is persistent and has already taken appropriate corrective action on over sixty rules and regulations that have inhibited America’s security and economy – according to the October issue of Whistleblower Magazine. It filled thirteen pages of his administrative accomplishments in their recent October issue – after only eight months in the White House.

Unfortunately, the mainstream media does not publish Trump’s accomplishments – or buries them deep inside their copy and/or publication.

Let me ask – why do you think our economy is booming after an eight-year slumber under Obama – since the election of Trump one year ago?

The GDP is already up over 3% – a 50% increase over the Obama era. The DOW Jones average has enjoyed 75 new record closes since his election. National wealth has increased by over $5.4 trillion. Unemployment is now down to 4.1%. New jobs have increased by over 1 million. America Is Rising Again – Becoming Great Again – despite all of the irrational negativity reported by the Leftist media, the progressive Democrats, academia, Hollywood, etc. They simply will not admit that their Leftist/
Socialistic/Fascist beliefs cannot compete with America’s Free-Market, Free Enterprise, Trump Agenda.

Frankly, I suspect the average Joe is sensing that things are indeed getting better and, accordingly, are feeling better down inside. But again, the mainstream media is not appropriately exposing this Trump leadership success.

See the attached screen shot from the Fox Business Network. 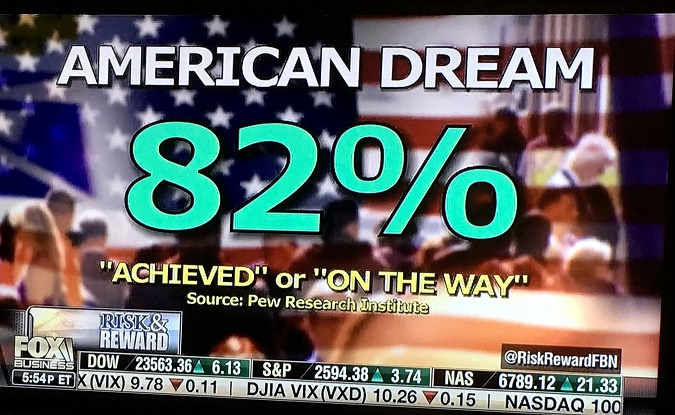