There’s at least one guy in Texas who really knows how to piss off his neighbors.

But the ACLU thinks that’s just too damn bad. 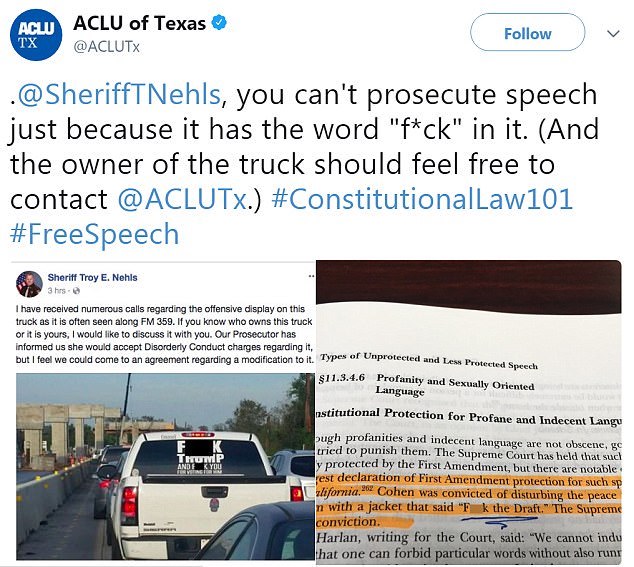 The same First Amendment that gives us the right to tell the PC police to go to hell when they complain about our ‘hate’ speech also backs up the ‘eff Trump’ truck.

Seems like there’s a clear ‘Maybe’ on that question.

One statute may or may not be relevant.

Police are looking to identify and talk to the owner, nevertheless.

Police in Fort Bend County are hunting a local man whose abrasively worded pickup sticker has set tongues wagging.
Sheriff Troy E Nehls posted a photo on Facebook of the pickup driving down the FM 395, with a decal reading ‘F**k Trump and f**k you for voting for him’ on its back window.
‘Our Prosecutor has informed us she would accept Disorderly Conduct charges regarding [the sticker], but I feel [police and the driver] could come to an agreement regarding a modification to it,’ he wrote.
Source: DailyMail

What do you think? Is he free to be an a-hole?

Or do certain community standards come into play?