They’ve drawn their line in the sand. It’s your move. What will you do next?

The law is clear. They just refuse to abide by it. And now, a felon who’d been deported 5 times managed to ‘accidentally’ discharge a gun, killing an unsuspecting American Citizen.

Those who defend ‘sanctuary’ cities are mocking our laws while pretending they have a ‘superior’ morality. ICE is treated as a foreign threat, while felons are welcomed and embraced.

Isn’t it time they should pay a price for it? 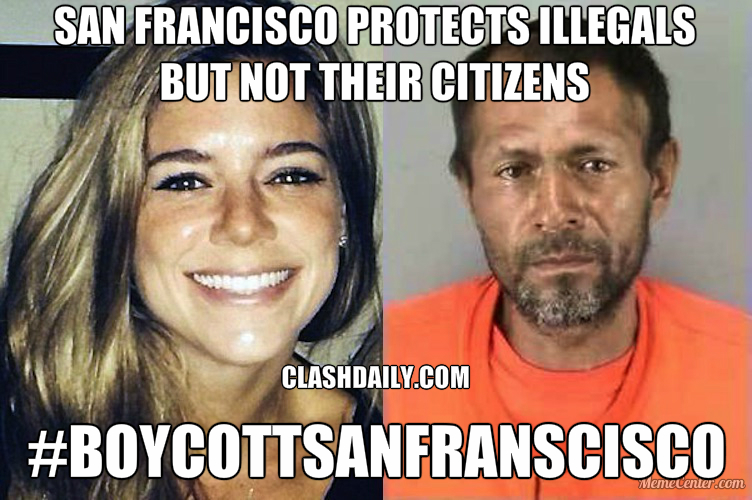 Remember what California did when States ‘dared’ to have laws that conflicted with their Hard-Left agenda? They created a ‘travel ban’! And they’ve added to it!

They’ve made it pretty clear that people whose laws they view as ‘odious’ should be punished.

Well, then. That works both ways.

Do you remember when people cared about the Opium epidemic that’s crippling large parts of America? If gun deaths are enough to wring tears from Jimmy Kimmel’s eyes, maybe we could get at least a trembling lip out of the Opiod deaths, don’t you think? After all…

In 2015, the most recent year for which full statistics are available, 33,091 Americans died from opioid overdoses, according to the Centres for Disease Control—almost three times the number who perished in 2002. Nearly as many Americans were killed by opioids in 2015 as were killed by guns (36,132) or in car crashes (35,092). In the state of Maryland, which releases more timely figures, drug-overdose deaths were 62% higher in the first nine months of 2016 than a year earlier.
Source: The Economist 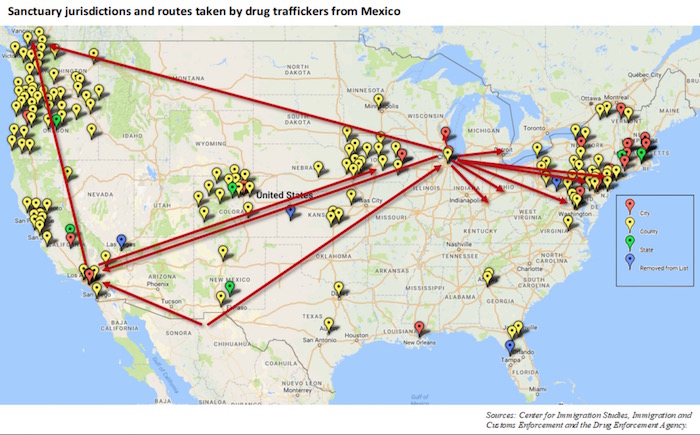 In case it’s hard to make out on a held-held device, the text on the image reads: Sanctuary jurisdictions and routes taken by drug traffickers from Mexico

This decision raises the stakes, for sure. And, as Clash reported earlier, the Defense Lawyer has already politicized and tied this decision directly to the President’s administration.

And predictions are already rolling in for the future political consequences of the ruling. Here’s Roger Simon:

Attorney General Sessions, with the firm backing of the president, will redouble his efforts to do away with sanctuary cities both financially and legally. It may take some time, but the days of these sanctuaries are over.
ICE will be set free to do its work. (It already has been, but even more so now with fewer complaints.)
The border wall will be built, at least a good part of it, and Trump will find it far easier to get his way with border security. The Dreamers will remain, but the public will back Trump on further security measures that will be enacted. Those measures will be stronger than hitherto predicted.
Fewer people will “leave their hearts in San Francisco.” Many Californians have already left the state, but some who have been on the fence about decamping will get off that fence and finally leave.
Although I’m probably overly optimistic here, fewer people will use the noxious euphemism “undocumented immigrants.” (Well, maybe a dozen or so. Or perhaps Zerate should have a document of his own that says “I’m a bloodthirsty killer. Set me free!”)
Source: PJTV

But will the ‘Sanctuary Cities’ themselves have to face any consequences? That’s up to you.

They’re smugly endangering the whole country, and think they can get away without paying a price. But YOU can prove them wrong. Make an example of San Francisco.

Cut off the money. How far you go is up to you.

Stop buying products made there?

Let us know in the comments what YOUR reaction is.

Maybe you’ve got other ideas of how to hit them in the wallet.

Are you ready to #BoycottSanFrancisco After DISGUSTING Steinle Decision?

Share if Sanctuary Cities are an affront to Rule of Law.