Here’s a hint: it’s not Colin Kaepernick. Oh, wait, you’d have to have been a SPORTSMAN in 2017 to qualify.

It’s no surprise to those of us rational human beings who have been paying attention.

It went to Jose Altuve and JJ Watt.

You can read our ClashDaily coverage here:

Perhaps if the NFL honored the ‘heroes’ of the game instead of coddling the ‘zeroes’ the fans wouldn’t be in such a hurry to leave:

Isn’t it nice to see Watt recognized for his philanthropy and his football skillz?

He’s well-loved in Houston, that’s for sure:

The announcement was made on The Tonight Show with Jimmy Fallon:

In Sports Illustrated’s release, they explained Watt and Altuve’s impact on the city of Houston. “The stories of these two athletes who care represent two very different paths, but they led to the same destination: #HoustonStrong. Congratulations to J.J. Watt and José Altuve, our 2017 Sportsperson of the Year honorees.”

Watt, who began his online fundraiser via his YouCaring page with a goal of $200,000, raised over 37 million dollars to help assist those affected through Southeast Texas. The Texans star defensive end recently explained how the money he raised will help throughout the region.

“Throughout this decision-making process, what mattered to me most was ensuring that the entirety of the funds would be utilized here in Houston and the surrounding areas for those who were affected most by Hurricane Harvey,” Watt said in his press statement. “With that in mind, I went to work with nonprofit organizations who have boots on the ground here in Houston and the surrounding affected areas to put the best plan in place and I am very excited to share that with you today.”
Source: Houstan Texans 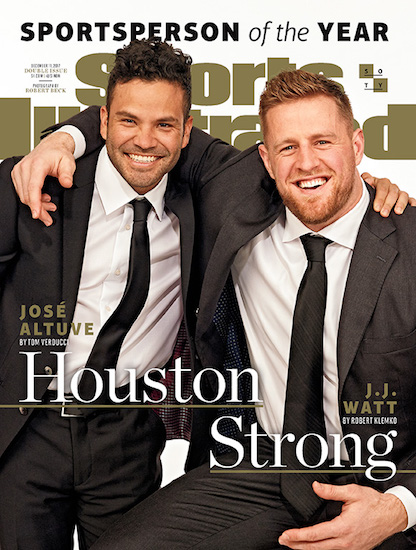 JJ Watt saw a cause he wanted to back and he did something.

He didn’t just kneel on the sidelines and wear Fidel Castro t-shirts with socks depicting police officers as pigs.

That’s because he’s not a wussified little nancy-boy like Kaepernick.

We’ve got one worthy of JJ Watt.