He keeps opening his mouth to blast Trump, but comes off looking like a chump, instead.

Gazillionaire pro athlete or not, he comes across as that guy who knows he’s just a little bit slow, and tries to compensate by using big words he doesn’t quite understand.

He was wearing sneakers, one black and one white and when asked about it, got back up on his soapbox. And the criticism we had leveled at him before seems just as relevant today as it did back in September.

This guy who brags about being ‘well spoken’ sounds like he’s flunked out of Hooked On Phonics. And he wants to lecture the rest of us. But instead, he’s concerned about taking ‘dictation’. 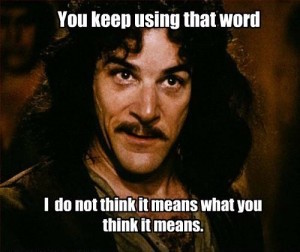 “Us as Americans, no matter the skin color, no matter the race, no matter who you are, I think we all have to understand that having equal rights and being able to stand for something and speak for something and keeping the conversation going. Obviously I’ve been very outspoken and well spoken about the situation that’s going on at the helm here, and we’re not going to let one person dictate us, us as Americans, how beautiful and how powerful we are as a people. Equality is all about understanding our rights, understanding what we stand for and how powerful we are as men and women, black or white or Hispanic. It doesn’t matter your race, whatever the case may be, this is a beautiful country and we’re never going to let one person dictate how beautiful and how powerful we are.”

And this guy thinks the Democrats have his back?

Does he even realize that the people he rails against have a higher opinion of actual equality than the Democrats do?

We’re the side that DOESN’T make every issue about race, the side that doesn’t pander to this or that special interest group, that doesn’t switch back and forth to ‘ethnic’ or ‘regional’ accents when it suits them to whip up a crowd, are on the Right?

Same goes with our policies.

School choice? It will help the poor, whatever color they may happen to be.

Corporate tax cuts? More jobs and better jobs, whatever color the person applying for them might happen to be.

Do we agree about the fundamental equality of various ethnic backgrounds?

That doesn’t mean that you have to interrupt a sporting event with a private protest.

If they were waving pro-life banners, instead of kneeling in the anthem, we think Lebron’s support of ‘free expression’ might suddenly change.

But taking a stand?? Their side can’t even agree about what the protest is supposed to accomplish. It’s just trendy to be in on it.

What’s up with Liberals?