Merry ‘Resistance’?  Is this what Hillary meant when she said that she wanted to be a ‘spiritual leader’?

Who thought that this was a good idea?

Putting Cankles as a Christmas tree topper is utterly ridiculous.

There are very few people that made headlines this year that would be less appropriate as a Christmas tree topper:

But here it is in all it’s, uh, pantsuited ‘glory’. 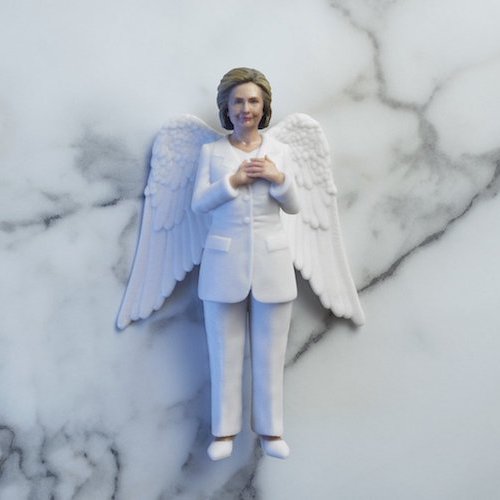 The Left’s ham-handed attempt to turn Hillary into a religious figure. 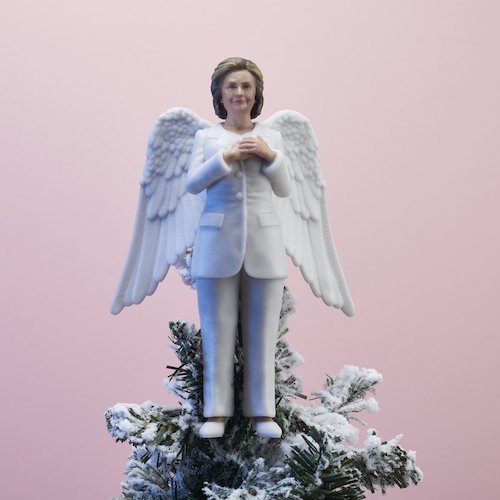 This British company really is selling them for £80 or about $105 U.S.

They also have Christmas cards with Hillary and Michelle depicted as angels: 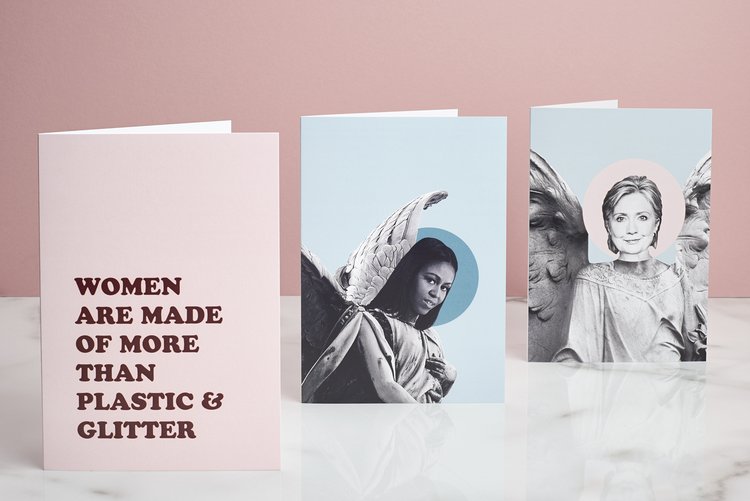 There’s a word for the impulse to turn horrible people into religious icons.

Is it any surprise that the party that once Booed the mention of God at their Convention, and stands 0-for-10 in their support of the Ten Commandments, would pick Hillary as a religious icon?

This is, after all, the same party that — DAYS before he was forced to retire, was calling Conyers ‘an Icon’. That’s inherently religious language, from a party that still has a religious impulse, but a strong dislike for the God it points to.

Christ and Christmas direct our gaze heavenward, to eternal truths. Hillary and her crew would store up their treasures in the political here-and-now, ‘where moths and rust destroy’

So, in the spirit of the ‘war on Christimas’ their instincts led them to replace the angel on the Christmas tree. With (what else?) a political counterfeit. 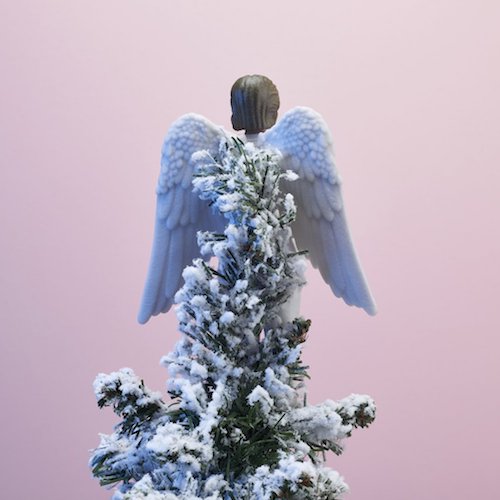 ????WISH UPON A STATESWOMAN???? . Sadly she won't be in the Whitehouse this Christmas but she will be the POTUS we deserve this holiday season ???????????????????? . Buy your HILLARY now. Link in Bio . #hillaryclinton #therealpotus #christmas #feminist #activist #christmas #christmasdecorations #christmas2017 #christmasgift

They want the FORM of the tree, without the religious significance of the Child whose momentous birth it Celebrates.

If they had even an ounce of biblical literacy they would see the irony of this move. But they don’t. Tucked into one of the Apostle Paul’s letters to the Corinthians is this little verse:

For such men are false apostles, deceitful workmen, disguising themselves as apostles of Christ. And no wonder, for even Satan disguises himself as an angel of light. So it is no surprise if his servants, also, disguise themselves as servants of righteousness. Their end will correspond to their deeds.
2 Corinthians 11:13-15

In their own hilarious way, without even meaning to, they are saying about Hillary what the rest of us have been saying for quite some time.

They are calling their precious Hillary an angel. But she’s a counterfeit.

In fact — there’s are specific names for an angel that rejects any connection to God.

Pick any one you like: Fallen Angel, Demon, Devil, Fiend, Evil One, Tormenting Spirit… the list goes on and on.

And what is the Hillary Cult doing? They are placing their hopes in her! See the hashtag ‘therealpotus’? They’re putting the Hillary in Hilarious!

So — to any of the Hillary Cult who puts one of these abominations on your tree, here’s the most positive spin we can put on it:

Thank you for your honesty.

One word of caution, though. You might want to flip to the back of The Book. It doesn’t end well for her team.

Hillary just might be ‘The Beast’ from the Book of Revelation… (or an underling, anyway).

If you think so, have we got the shirt for you.
Beware of the Hildebeest