You know this would NEVER have happened under a Hillary Administration, right?

Hey NeverTrumpkins, if you claim Trump is such a ‘Liberal’, then why is the DOJ finally taking the Planned Parenthood sale of baby-parts seriously?

Here’s the news as it broke:

“The Department of Justice appreciates the offer of assistance in obtaining these materials, and would like to request the Committee provide unredacted copies of records contained in the report, in order to further the Department’s ability to conduct a thorough and comprehensive assessment of that report based on the full range of information available,” Boyd wrote in a letter to the panel.
Source: CBN

You remember that story, don’t you?

GHOULISH: In The Market for UNBORN Baby Parts? A Baby’s BRAIN Sells For …

And here’s just one of the several shocking details from that story: 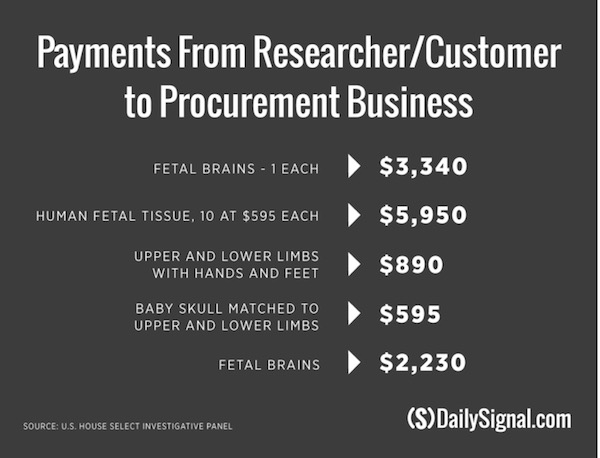 And if that doesn’t fire you up, how about this one?
UNREAL: Did Nancy Pelosi Just Defend Planned Parenthood Selling Baby Parts?

“Planned Parenthood has said that they have done nothing illegal,” Pelosi said during her press conference on Capitol Hill today, insisting that the corporation doesn’t charge for fetal tissue transfers, only enough money to “defray the cost of mailing

It was that hidden video story where they were haggling over the price of baby parts with a top level Planned Parenthood executive … over a meal.

In that final report entitled “Human Fetal Tissue Research: Context and Controversy” published in December 2016, Grassley referred Planned Parenthood and other providers to the FBI for investigation.

Grassley said at the time that the committee has discovered enough evidence that shows how abortion providers had transferred fetal tissue and body parts from aborted fetuses for research by charging amounts higher than they actually cost.

“The report documents the failure of the Department of Justice, across multiple administrations, to enforce the law that bans the buying and selling of human fetal tissue,” Grassley wrote last December urging the Justice Department and FBI to investigate. “It also documents substantial evidence suggesting that the specific entities involved in the recent controversy, and/or individuals employed by those entities, may have violated that law.”
Source: FoxNews

Finally, an investigation of the same information that was revealed on a hidden camera video that was gagged by a judge who had familial connections to Planned Parenthood.

Let’s finally learn the truth behind that infamous ‘I want a Ferrari’ statement!