Does she get a pass because she’s a professional loudmouth, or should Feds take this seriously?

Just before the vote that led to the most significant tax changes in a generation, one that was passed by the Republicans’ slim margin in the Senate, Rosie had a grand plan.

Knowing how McCain was able to deep-six the ‘Skinny Repeal’ with his single vote, effectively rendering the Republican triple-majority void, Rosie — part of the so-called ‘Resistance’ — tried to influence some of the less stalwart Republican Senators to break ranks and scuttle the tax plan.

Trending: EPSTEIN: Medical Clues In His Eyes, Legs Point To Murder, Not Hanging

And — Rosie being the melodramatic attention whore that she is — so was Social Media.

You can get a sense of how she meant it by seeing what she tweeted and retweeted on her timeline.

Sometimes she affirmed that she’s a patriot willing to put her money where her mouth was.

She even claims she’s willing to ‘negotiate’.

Other times she retweets other people who ‘know she’s kidding’.

DM me susan
DM me jeff

no shit
2 million
cash
each

And really, considering how Soros funds completely DWARF anything the Kock brothers might generate, every reference to the Koch brothers stealing the election is the closest she ever gets to making me crack a smile.

FYI, Rosie had a nasty Twitter war with Ben Shapiro about her felonious behavior and it was beau-ti-ful.

Forbes laid out the statute this way:

Under 18 U.S. Code § 201, bribing a member of Congress is, indeed, a crime. The statute prohibits anyone from “corruptly” offering “anything of value to any public official” with the intent to influence the official or an official act.

They also went on to say that the ‘corruptly’ part (i.e. intent) would be the toughest to prove, especially with her history of hyperbolic melodrama, and the fact that she is alleged to be a Comic.

Rosie is now comparing herself to Gandhi. 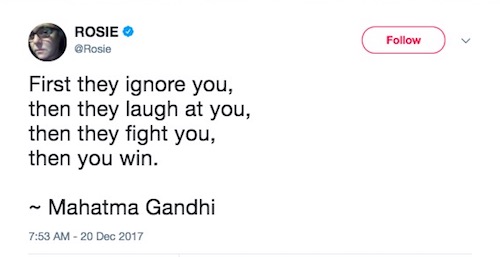 Should they make an example of her, or would that only make her another ‘icon’ of the Left?

Virginia State Officials Preparing For Big Gun Rights Rally On Jan 20th And If Any Violence Breaks Out It Will Be Their Fault
January 18th, 2020 Right Wing Tribune