They’ve just created a dual-personality, dual-faced robot. And that’s not all they’re working on…

They’re working on male sex robots as well as ‘more gender variation’ beyond that.

Matt McMullen, the creator of the sex dolls unveiled the new feature in an extremely disturbing demonstration that had just the robotic head on a stand.

Sex robots have become a fast-growing field of development, with Abyss Creations’ ‘Harmony’ RealDoll among the most famous to date.

And now, it looks like Harmony is getting a sister.

On stage at CES for Engadget’s After Hours show, creator Matt McMullen debuted a new personality named Solana – by switching the sexbot’s life-like face for another.

McMullen also revealed he is working on developing male sex bots along with the potential for more gender variation beyond that, and cleared up some misconceptions about how the integration of male anatomy may come to fruition.

Watch (apologies for the annoying YouTube channel that this came from):

‘The face is actually modular, the same way that within the app you can change the personality settings and create a separate profile and separate avatar, you’re able to remove and attach a different face to the same robot very easily,’ McMullen said.

‘And anyone can do that.’

But the process, while quick, is somewhat unsettling.

Peeling the ‘skin’ off the robotic head, McMullen revealed the mechanical skeleton beneath, with bulging eyes, dental mold-style teeth, and a clear cranium exposing her inner circuitry.

To all those would-be purchasers… this is the terrifying thing that lies beneath the skin: 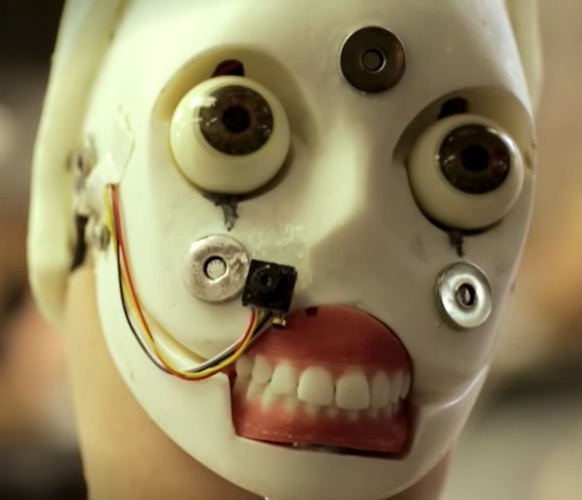 That thing is the stuff of nightmares.  Don’t you just love the metal snaps for the interchangeable face?  They’re just so sexy.

Creating robots just for sex is disturbing enough, but now to be able to have ‘multiple partners’ with just one robot? There are significant moral questions about these sex robots, and creators seem determined to create even more.

Some advocates suggest that they might prevent the rape of actual women by allowing rapists to rape robots:

One highly controversial area that people are proposing sex robots are used for is to prevent sex crimes such as rape.

“The idea is robots would resist your sexual advances so that you could rape them,” said Sharkey, who launched the Foundation for Responsible Robotics 18 months ago. “Some people say it’s better they rape robots than rape real people. There are other people saying this would just encourage rapists more.“

There are also suggestions to use child sex robots to keep pedophiles from abusing children, but experts disagree whether or not this will diminish or increase the desire to have sex with children.  Same with the ‘rape’ dolls.

Do they not think that people will get bored of the program and gravitate to the real thing?  Do they think that a sex robot will keep a cheater from cheating or a rapist from raping?  I don’t think that’s how people work.  These sex robots are just feeding an appetite that already exists in the minds of disturbed individuals.

More and more people are willing to have a ‘relationship’ with a sex robot.

A survey published by innovation agency Nesta last June found that a quarter of young people would happily date a robot. But Sharkey highlighted that robots have a number of limitations in relationships.

“If they do then it’s going to be very sad because it’ll be a one way relationship,” he said. “Robots don’t have any kind of emotion themselves. People bond with robots but it’s very one way. You’re loving an artefact that can’t love you back and that’s what’s sad about it.”

He added: “The best they can do is ‘fake it’. They can have an orgasm or whatever and pretend to like you but they’re not going to be that good at it.”

That is just freaking insane.

It certainly looks like this thing is from the pit of hell.

Satan must be very pleased, indeed.

Fortunately, many people are still creeped out by these nearly human robots.

This is what happens when sex is reduced to a physical act devoid of commitment, emotion, and mutual respect.

But hey, call me old-fashioned.