The folks who would rather crawl over glass than say ‘Islamic Terror’ wasted no time buying in to ‘white supremacist’ claims, but…

*Update — that original ‘racism’ allegation? It was from some online trolls trying to see who they could dupe. They landed a BIG fish!
Details about the troll are added further down.*

They really are pushing a narrative. Remember when the Wikileak email dump revealed this little nugget from the Hillary camp?

“Better if a guy named Sayeed Farouk [sic] was reporting that a guy named Christopher Hayes was the shooter.”

They WANT one side to be the bad guy. They WANT a recognizable ‘victim group’ so they can ride in as the great defender of the oppressed.

A number of ‘big name’ outlets picked up on this report:

And here is a related screen shot: 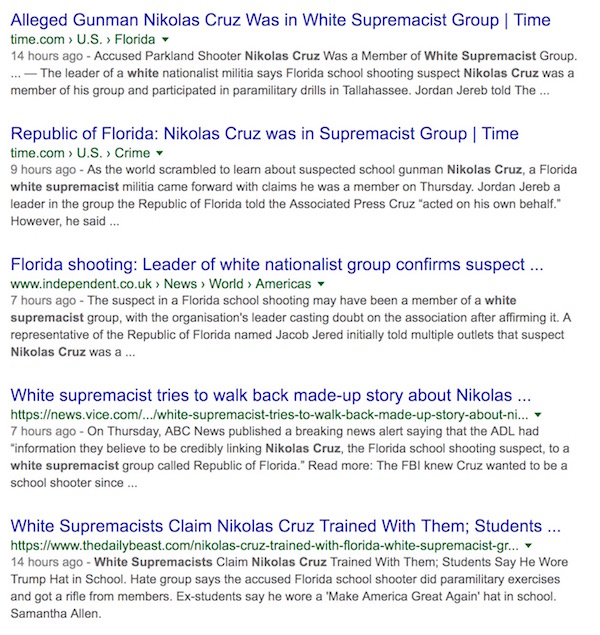 CNN had one too, but they’ve revised it. As have some others.

Any gutless weasel who ends the lives of 17 people, and wounds another 50 isn’t exactly a ball of sunshine. But, looking at the photos of the victims, it’s hard to conclude that he was particularly ‘driven’ by race.

It’s just as plausible that he hates the whole world, himself included.

Not that any of this stopped the press from reporting his ‘white supremacist connections’.

Becuase if you can chalk it up to hateful white men, that ties it up in a neat little bow, and you don’t have to give too much thought to causal events or prevention.

You have your cookie-cutter ready-made answer and can go back to race-baiting and hating Trump.

Fortunately, law enforcement has higher standards of evidence than the press does. (If they still have any at all, when there’s a narrative on the line.)

Leon County law enforcement sources told the Tallahassee Democrat that they could not find information linking Cruz, 19, to the Republic of Florida Militia, as claimed by the group’s self-proclaimed leader Jordan Jereb.

His comments to the Anti-Defamation League and The Associated Press set off a media firestorm Thursday at about midday that Cruz was connected to the alt-right, white nationalist group.
Source: Tallahassee Democrat

Shockingly — or not — they may have jumped to conclusions.

“We are still doing some work but we have no known ties between the ROF, Jordan Jereb or the Broward shooter,” Jordan said.

*Update — it’s even worse than we first thought. ADL was beclowned by some internet trolls on — wait for it — 4-Chan!. Which means, of course, that all of our so-called ‘approved’ media including names like CNN, Time, Vice, Independent and others — were all regurgitating an internet hoax put up by some sh-t disturbers with a lot of time on their hands. 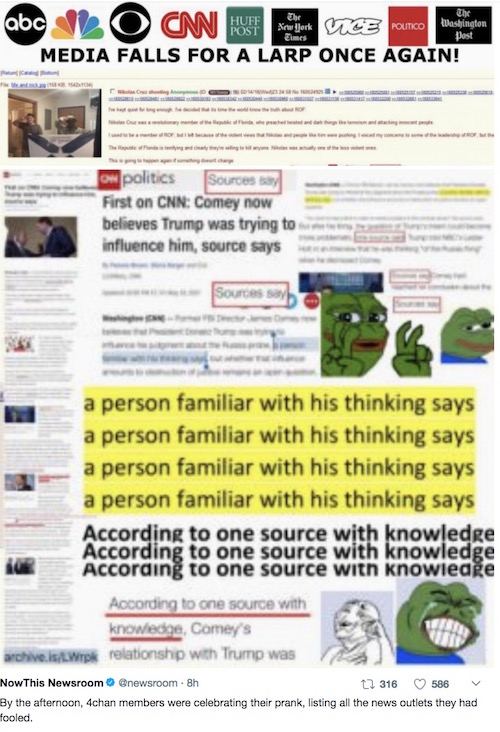 welcome to the future. pic.twitter.com/rBj61SUZC8

What could possibly have motivated someone to claim an association with the man who — for the moment — is the most talked about murderer in the country?

How about free publicity?

It’s hard to imagine which is worse.

They DO know and are deliberately propping it up with publicity so that they can have a handy foil to rage against.

What is the proper reaction to white supremacists groups?

How do you react if you notice road kill on the side of the road?

You notice it briefly as you walk past. You turn your head away in disgust. And you go back to whatever more important things you were doing when you saw it in the first place.

This is no different.

A Guide for Men: How to Deal With the Police
June 4th, 2020 Brass Pills