Two decades ago, it was art. Now it’s practically a ‘hate crime’. Yes, people really are this stupid.

This is proof that America is the greatest place on earth.

Becuase in OTHER parts of the world, people are too busy putting food on the table, dealing with major illnesses like Malaria, suffering under corrupt government incompetence, or dealing with dangerous government policies that threaten the very stability of a nation.

Seriously, when have you seen a headline when US politicians actually threatened citizens with violence, like they just did in in South Africa?

‘We are not calling for the slaughter of white people – at least for now’: South African parliament votes to SEIZE white-owned land as experts warn of violent repercussions

It’s easy to forget how easy we’ve got it here, sometimes.

And when people don’t have substantial problems, like epidemics, famine or war, they look for little things go get wrapped around the axle over. Like a 500 lb statue of a Gorilla.

Originally, this gorilla was set up in the park, with several other animals as an art piece. It weighs, you guessed it — 500 lbs.

There are other animals in that park, too, like a camel. It isn’t as though this was a special stand-alone piece.

Kids started climbing on the animals, as they tend to do, and some adults noticed that the gorilla was poorly anchored, and started to wobble.

Not wanting any kid to get trapped under a 500-lb art piece, they came up with what must have seemed (at the time) a clever solution. They built a cage around the gorilla.

That way,  the kids can use the cage as a climbing toy, AND they got to keep the gorilla, which was very popular with the locals, who have informally dubbed the park ‘gorilla park’.

That was BEFORE being perpetually offended was considered a good thing.

Now the Leftist killjoys have insisted on having the gorilla removed. And yet again, politicians, fearing being tagged as ‘racist’ have kissed the asses of the bullies.

“Denbow saw an uptick in complaints about the playground primate during the last few weeks. There were more and more phone calls, and personal discussions, and he, the city manager and a city council member, decided it needed to come down,” the TV station said.

The mayor said in a statement: “The City of Corsicana has recently made the decision to remove a display in Community Park,” the letter stated. “It was determined to be potentially racially insensitive. This was brought to our attention by a few citizens. The circumstances were evaluated and determined to be valid. It was not possible to leave the gorilla without the cage due to safety reasons. The statue was top heavy and was caged initially to protect the children. The cage will be left and turned into a climbing feature. The City will look at replacing the display in the future.”

Memorials have sprung up around where the gorilla, dubbed Dobby, which included signs, bananas, flowers, candles, stuffed animals and even beer. One site on Facebook is called “In Memory of Dobby.” A petition was created on the website change.org and called #GorillaGate2018.
Source: DailyWire

A few troublemaking whiners can bully the government into kissing its ass. And if we keep rewarding the bullies who use emotions — rather than reason — to manipulate politics, the actual will of the people won’t matter.

Let’s let an actual Gorilla tell the whiny killjoy activists precisely what we feel about them banning Dobby. Actually from banning  “all of the things” that they don’t like. 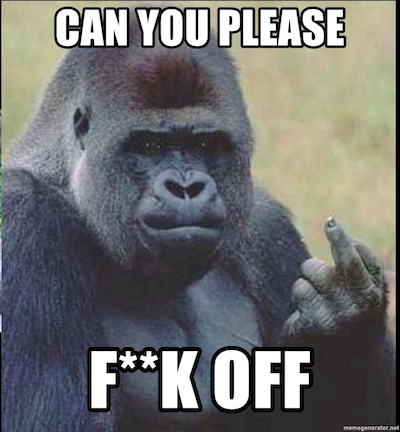 The story doesn’t stop there. It gets weirder.

There is a candle-light vigil for the statue. We can’t make stuff like this up.

Will they sing Kumbaya?

Is it just a PR stunt trolling the gutless government that took it away, or are they really that anguished about the missing great ape?

Like we said. The story is weird from beginning to end.