The school resource officer that took down the MD shooter blew a hole in that narrative, too.

They all got together and CHEERED the outlawing of ‘literally every semi-automatic rifle that’s sold in America’.

THAT is the end-game of people now marching to ‘trade a little essential security for safety’. 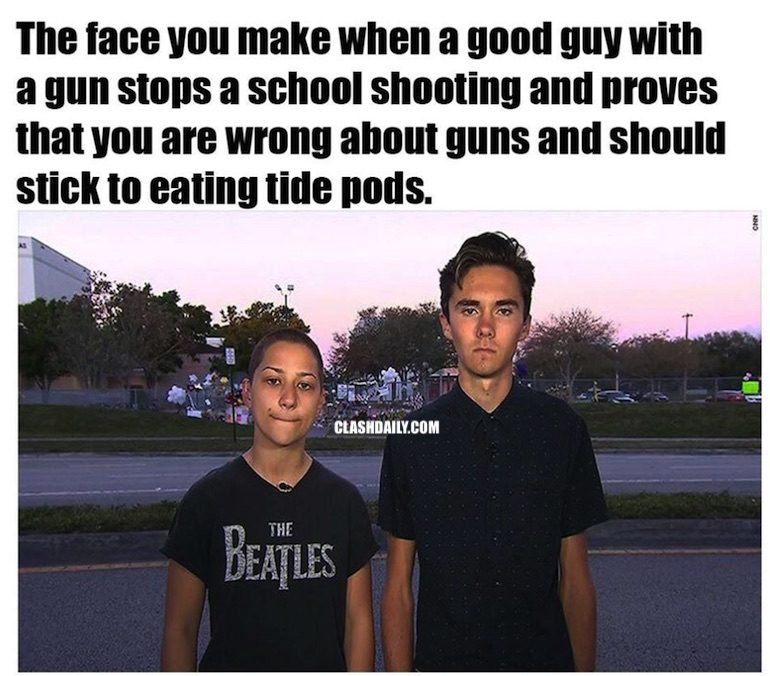 The resource officer in Florida failed them. But that doesn’t mean they are ALL cowards.

That was proven only a month later. The same network that held the townhall that became the current anti-gun movement reported it this way:

When a 17-year-old gunman walked into Maryland’s Great Mills High School on Tuesday, the swift action of the school’s sole resource officer, Blaine Gaskill, was instrumental in bringing the incident to a quick end.
Gaskill’s response was hailed as an example of exactly what a resource officer is supposed to do in such a circumstance, particularly when contrasted to the actions of the security officer in last month’s shooting in Parkland, Florida. (In the incident at Marjory Stoneman Douglas High School on February 14, the armed school resource deputy waited outside the school building as the shooter gunned down students inside.)
“He responded exactly how we train our personnel to respond,” St. Mary’s County Sheriff Tim Cameron told reporters.
Source: CNN

How is it we are raising a generation of me-monkeys that does not have the moxy and spirit that could rise to any of the great and rousing speeches that fill men’s hearts with courage?

Speeches like Henry V’s ‘Sir Crispin’s Day’ speech. Or Churchill’s ‘We Will Fight Them’ speech. Or Patton’s If you need me, you can always find me in the lead tank. Or Patrick Henry’s Liberty or Death.

(Patrick Henry’s was rated the 1st of top 10 inspiring speeches in history, here)

Actually, today’s protesters are siding AGAINST liberty, aren’t they?

More specifically, they are taking a stand against YOUR liberty.

Here’s a speech that even THEY must have heard, in the mouth of ‘Aragorn’ from Lord of the Rings. Are they so far gone and enfeebled that NOTHING in them rises up when they hear these words?

Hold your ground, hold your ground! Sons of Gondor, of Rohan, my brothers! I see in your eyes the same fear that would take the heart of me. A day may come when the courage of men fails, when we forsake our friends and break all bonds of fellowship, but it is not this day. An hour of wolves and shattered shields, when the age of men comes crashing down! But it is not this day! This day we fight! By all that you hold dear on this good Earth, I bid you *stand, Men of the West!*

The ‘good guy with a gun’ stopped the killer in his tracks, because he had courage, and took action.

We as a nation are at a crossroads.

We can be those who call for ‘mama government’ to hold us close and keep the monsters away. OR, we can rise up as men and women of courage, and do that job ourselves.

You can only pick one.

Which will it be?