Each side thinks the other a fool. Who’s right? And can we even know?

Atheism and Christianity are not new rivals. They’ve been at it back and forth for a very, very long time. Even the Bible itself references that.

Let’s look at the Atheist position, first. They claim to be the ‘sensible’ position and criticize faith as irrational.

But their position isn’t as water-tight as they might hope.

When Easter and April First Collide — Who Is The Real Fool?

They embrace a materialism, for example, that cannot provide a logically consistent OBJECTIVE definition of good and evil. But that doesn’t stop them from filling the internet with complaints about how God himself is capricious and unjust.

Rationally, that’s a problem for their position.

They give a Materialist definition for reality which has made the Secular West measurably less able to cope with reality and suffering than any competing worldview. If it is more rational, it should have us better prepared, emotionally, for the real world.

They will agree that rape, for instance, is an unconscionable act of evil because it is sex forced against a victim’s will. That same person can turn around and tell us that even free will itself is just an illusion, and we are all just ‘dancing to our DNA’. If free will is an illusion, how can rape really be rape?

They make jokes about ‘zombie Jesus’ and Christian morality without giving a moment’s thought to their own stories.

How do they explain their irrational fascination with stories about monsters? Stories that somehow strike a chord in the general population. We love reading and watching stories about zombies, vampires, werewolves and spirits or ghosts.

What makes these things so spooky? All these creatures are in that border-land between human and not-human.

In their altered state (undead, cursed, or a restless spirit), they are cut loose from morality or will. They do what the are compelled to do. They are an undying appetite.

Secularism has no word that quite captures that state, except in stories. But religion does.

Ironically, for all the Zombie Jesus taunts, Easter is exactly the OPPOSITE of the story of the undead.

The same people who scoff at the gospel have no trouble enjoying the ending of Dr. Strange. In the movie, the title character finds himself in a situation where he faces an all-consuming evil, and he triumphs over it by making a deliberate sacrifice of himself, and — curiously — an ‘infinite’ sacrifice, from which he somehow returns, even after dying.

Sound familiar? They borrowed the Christian story, but their myth wasn’t very specifically anchored in time and space like the original is. (Details like that set it apart from regular mythology, as mythology expert, Lewis acknowledged it ‘a true myth’)

The people and places in the Bible are anchored in history. Jesus and his followers interacted in public, with known people, at particular times and places in history. They have been documented in outside sources.

The fact that Jesus lived is beyond serious dispute. But what happened to his body? If his body could be produced, that would totally falsify Christianity — a feature acknowledged in the Bible itself (I Cor 5:14). Which other belief — secular atheism included — gives a hard-and-fast test against which they could disprove their entire worldview?

Falsifiability, we notice, is a scientific, or (if you prefer, rational) test for an idea.

Two other quick examples for you to consider as I close.

One — Christ is offered as a transformational force for people’s lives. We see it in the first disciples, where they went from being cowards who abandoned him at his arrest, to bold proclaimers of his gospel. We see that same thing in the transformation of other lives in the modern day. 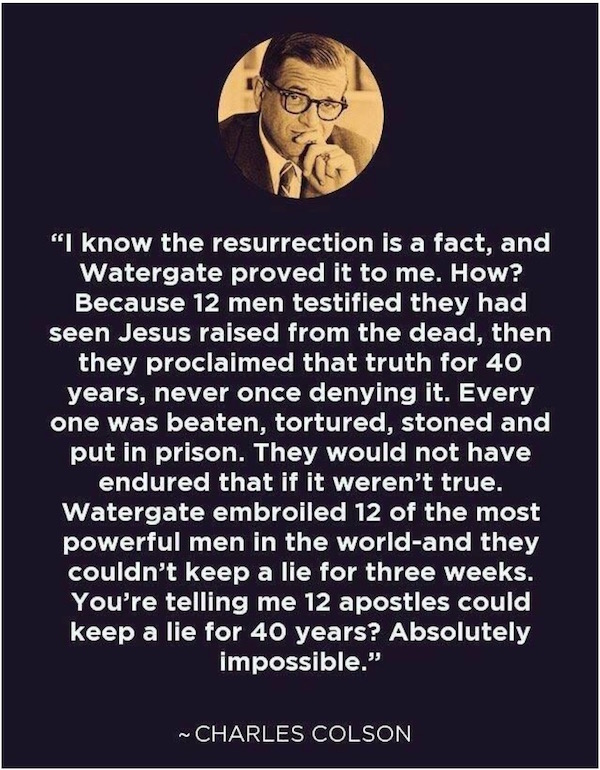 And nobody can deny that Colson one such powerful example of that changed life we just mentioned.

The other point is the enduring nature of it.

In the beginning, it had no power, prestige, or military zeal that would let it survive even that first generation or two. It faced oppression on every side. The Apostles all faced violence, and most of them faced a violent death.

But two millennia later, despite the fickle hearts of men, it endures.

We wish you a blessed Easter. And we encourage you to take these questions seriously and don’t settle for ignorance as an answer.