He’s called on his minions to contact Ingraham’s advertisers.

Why? Because she retweeted an article about his four college rejections with the statement, ‘David Hogg rejected by Four Colleges To Which He Applied and whines about it. Dinged by UCLA with a 4.1 GPA…totally predictable given acceptance rates)‘.

Hogg had revealed to TMZ that he was rejected by 4 colleges in California.

David Hogg, 17, recently revealed in an interview with TMZ that he was not accepted into UCLA, UCSB, UCSD, or UC Irvine.

Ingraham then took to Twitter and accused Hogg of ‘whining’ about his rejections.

‘David Hogg rejected by Four Colleges To Which He Applied and whines about it,’ she tweeted on Wednesday. 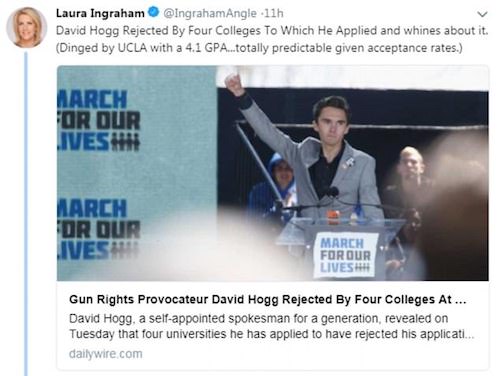 Hogg fired back at Ingraham with a hashtag campaign that misspells Ingraham’s name:

He then told his followers to ‘pick a number between 1-12’  and ‘contact the company next to that number’ along with a list of advertisers which included AT&T, Nutrish, Allstate, Esurance, Bayer, Liberty Mutual, Arby’s, TripAdvisor, Nestle, and Hulu. 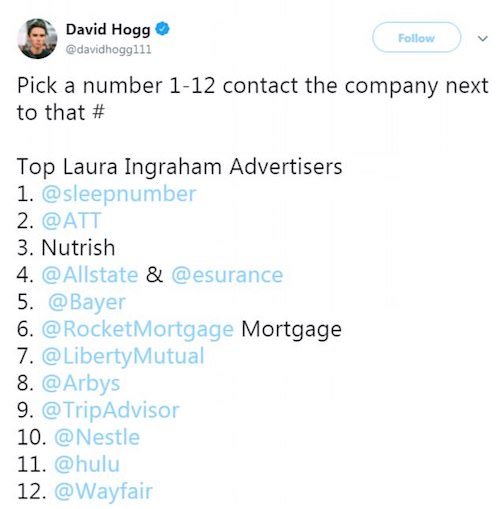 Hogg then retweeted the Ingraham tweet to each advertiser and asked ‘why do you support this’?

Hogg spoke with TMZ on Tuesday and revealed that he had not been accepted by the 4 schools. He also said that he’s finding it difficult to focus on college applications and acceptance with ‘everything else that’s been going on’

The teen also revealed he has a 4.2 GPA and scored a 1270 on his SAT, both of which are considered above average.

Hogg, who recently helped organize March For Our Lives, admitted that it was hard to focus on college decisions at the current moment.

‘It’s been kind of annoying having to deal with that and everything else that’s been going on but at this point, you know, we’re changing the world,’ he told TMZ.

Hogg said he was not surprised by the decision and did not attribute his rejection to his involvement in the movement, suggesting instead that he had been overlooked in a vast number of applications.

‘I am not surprised at all honestly,’ he said.

‘I think there’s a lot of amazing people that don’t get to college not only that do things like I do, but because their voices just aren’t heard in the tsunami of people that apply every year for college in such an economic impacted school system which we have here in America where people have to go into massive amounts of debt just to go to college and get an education.’ 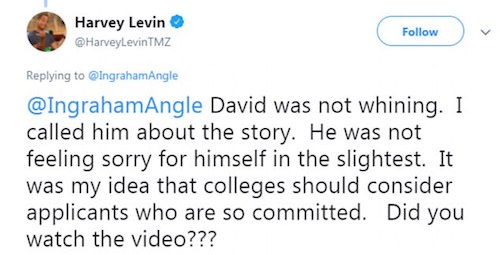 Man, I’m getting pretty tired of David Hogg who has been now shifting his activism to expand from gun control to include Voter ID.

How will that stop school shootings?

Easy peasy — if you get rid of Voter ID, you can get people that cannot legally vote to vote. And we know who they’re gonna vote for, right? Let’s just say that it’s unlikely that they’d vote for the folks that would support enforcing the laws already on the books *cough* immigration *cough* and the Constitution — which would include the Second Amendment.

Hogg has been pretty clear that he despises the NRA and doesn’t respect politicians that are endorsed by the NRA.

Another Parkland survivor, however, called out Hogg’s hypocrisy: 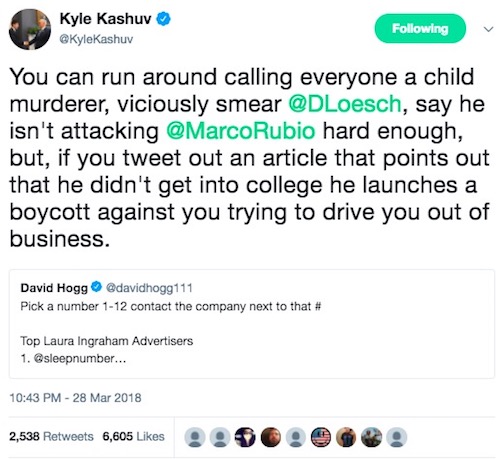