students are insulting “the memory of those who were killed” adding that their actions “abuse and insult me and every other lover of liberty”.

We’re told we have blood on our hands, that we don’t care about victims, and what the hell do we know anyway, since WE have never gone through a tragedy.

We could go over the reasons why suffering in a tragedy does not make you an expert at SOLVING that issue… again. Which would be just as pointless as it was the first time, or we can skip to the end of the argument, and just steal the moral authority of thier supposed high card away from them.

Notice how they “value” the opinion of a victim so highly…

KASHUV: Well, yeah. I talked to Senators, and I looked at all the facts, and they all point in the same direction, that a ban on assault weapons will not solve this issue. …

BRENNAN: And restrictions on high-capacity magazines?

KASHUV: That won’t solve the issue. What we’ve seen is that there are certain things such as enforcing the regulation that’s currently in law — I mean, we’ve seen on so many different levels that the “cowards of Broward” failed, the FBI failed, Sheriff Scott Israel failed. So many different multilayered levels failed in Parkland, and it’s absolutely reprehensible that I didn’t see one single poster yesterday at the march that said “eff Sheriff Scott Israel.”

BRENNAN: So, you are a survivor. You lived through this assault yourself. What do you think would have prevented another student like you from going through something similar?
Source: DailyWire

…simply because he’s a victim. But for “some” reason, his specific, facts-based idea do not get anywhere NEAR the media attention as the grandstanders on the other side.

The media — and most of the student protesters (with Kyle being a notable exception) — have a single-minded focus on one explicit objective. Gun laws.

One of the things making Rockers like Jesse Hughes ‘a different breed’, is that IDGAF attitude toward public opinion. And that came out in force after the march for guns.

You see, they have a different ‘take’ on mass shootings than the popularly-held view that the solution is ‘gun control’.

Here are a few of the things the Eagles of Death Metal frontman Jesse Hughes said, besides posting some memes mocking the bass-ackward logic of hitting law-abiding gun owners for the consequences of those who DISOBEY the law. 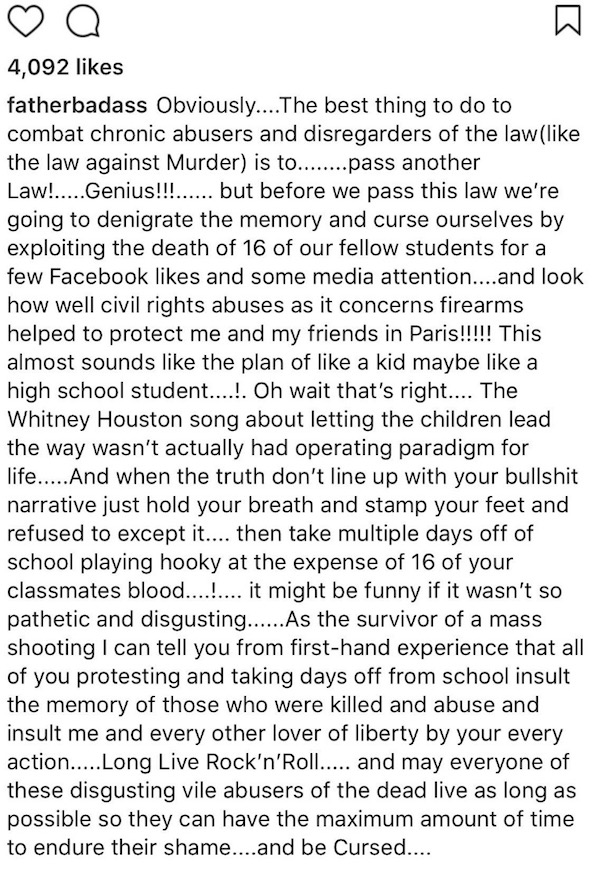 He got a little sarcastic, sure. But it’s a little hard to deny that ‘first-hand experience’ he’s talking about. He’s seen more bloodshed firsthand on one day than my own military father –who served in peacetime — did in 20+ years of service.

Go ahead. Hit those who don’t obey the law with Yet another law for them to ignore. That’ll solve the problem. Maybe we should go for broke and outlaw murder, too.

He’s taking the assault on his liberties personally. Paris has the kind of gun controls they are pushing look how much good THAT did him.

130 dead. Somewhere between 352 and 368 wounded. And images we could scarcely imagine burned into his memory.

The concert-goers were picked off one-by-one without any great urgency; the ISIS goons knew that they didn’t face any credible threat of bullets coming from the other direction.

As for his claim that they are exploiting the deaths of those students, he does seem to be standing on solid ground, as evidenced by this exchange:

Hey @Emma4Change please stop using my sister’s name to push your agenda, she DID NOT and WOULD NOT support it

He is the brother of one girl who was actually KILLED in the Parkland School Shooting. Notice Twitter hasn’t given him any blue checkmark. Perhaps the fact that he isn’t flogging an agenda has something to do with that.

And before anyone plays the ‘you have to respect these kids’ card, here is the ‘respect’ the grieving brother of a slain 14-year-old girl gets:

Unbelievable. I have no words. pic.twitter.com/BPuEbtlrc0

Our lives are literally disposable, to those people, because we dare to embrace different ideas than them.

That starting point is only one small step away from the thinking that lets people empty a weapon into a crowd in the first place.

Lawful gun owners commit less than a fifth of all gun crimes, according to a novel analysis released this week by the University of Pittsburgh.

In the study, led by epidemiologist Anthony Fabio of Pittsburgh’s Graduate School of Public Health, researchers partnered with the Pittsburgh Bureau of Police to trace the origins of all 893 firearms that police recovered from crime scenes in the year 2008.
Source: WaPo

Maybe — just maybe — the focus should be on something OTHER than lawful owners, huh? Because outlawing guns in 2012 didn’t do anything to make life in Venezuela better, did it?

Just because he was on the right side of the issue, doesn’t mean Social media couldn’t bully him into silence.

They’re probably going to take a beating over this stand. Boycotts, social media blackouts, canceled tour dates. The usual they-don’t-agree with me, punish them bs.

For anyone who wants to show them some love, there is a way. Here is their website. EaglesOfDeathMetal

Instead of taking liberties away, they did something a little more… productive: (excerpt from a letter on their website)

Hello talented friend, The senseless and violent terrorist attacks of Nov. 13, 2015 in Paris have left us all unsettled and we dare not give another second of precious time to those who have tried to steal our freedoms and take away our power.

Instead, we are writing to ask for your help to Play It Forward. We are calling upon our friends to donate their time, talent and good will in a show of solidarity to help the victims of these atrocious acts in Paris and those affected by terrorism worldwide.

We are asking for you to cover our song “I Love You All The Time.” For every cover sold, we pledge to donate 100% of the publishing income to The Sweet Stuff Foundation. We ask that you also donate the money generated from sales of the song to the charity.

In the same spirit, we would encourage you to offer one of your songs up to be covered by another artist, and follow suit – donate the publishing monies to charity – The Play it Forward Initiative.