Trump never promised us ‘business as usual’. He’s more of a get-r-done kind of guy. And he’s not really convinced that this budget bill is such a great one.

Many of us on the right are naturally suspicious of any bill that puts a smile on Schumer’s face, or a spring in Pelosi’s step.

With more than 2000 pages in it and no time to read it before the vote, most people haven’t a clue where the money is going, and could care less how it’s being spent… or what poison pills might be lurking in those reams of pages.

There are, of course, exceptions to that rule.

Rand Paul read out 600 pages of the 1.3 trillion #omnibus bill and posted some of it to twitter. At one point he had to order pizza.

The Republicans are taking a lot of heat for putting forward a budget bigger than anything Obama put forward, even if there is massive military spending involved in it.

But there are some glaring problems with it.

It puts a CAP on ICE agents.

No real money for the border wall.

No DACA arrangments. (And that would be a crapton of MORE money to resolve.)

Trump’s not thrilled with this so far.

DACA was abandoned by the Democrats. Very unfair to them! Would have been tied to desperately needed Wall.

I am considering a VETO of the Omnibus Spending Bill based on the fact that the 800,000 plus DACA recipients have been totally abandoned by the Democrats (not even mentioned in Bill) and the BORDER WALL, which is desperately needed for our National Defense, is not fully funded. 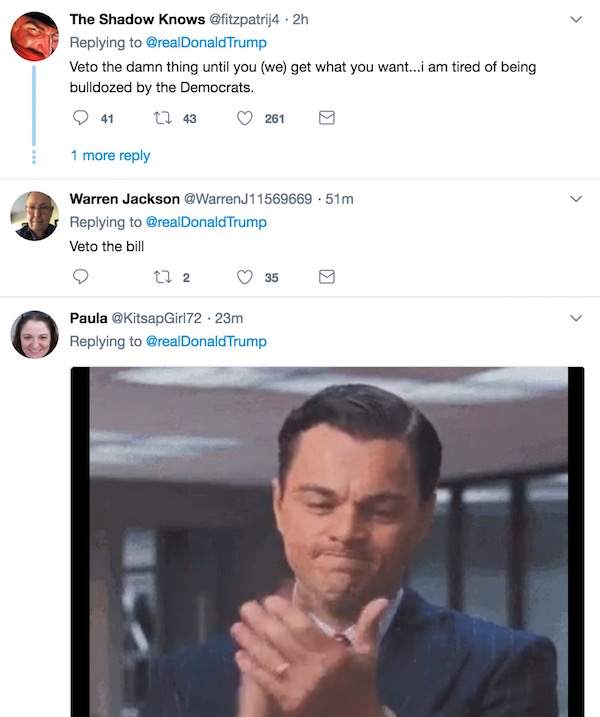 Then why is Schumer smiling?

Becuase he thinks he’s set up a Check-mate lose-lose scenario for Trump. Or at least it looks that way.

Judging by the regressive left’s tweets on his timeline, they think they win either way. If it passes, there is bank-breaking spending beyond their wildest dreams, which is rocket fuel for the swamp critters.

If not, they are hoping he’ll veto this, so they can claim it was the ‘Russian sanctions’ he was objecting to, and say he’s not so very committed to the Military rebuild as he claims.

They are expecting Trump to roll over and take all the pork that’s been stuffed in there to get the Dems to stand behind this vote.

There’s a news conference coming up, so expect updates soon.

And he’s already playing rope-a-dope with the press. He shifted the venue from the WH Press Briefing room to the Diplomatic Room at the last moment.

We’ll update this piece when he’s finally tipped his hand.

He reluctantly signed it. But he made it VERY clear he wasn’t going to sign another BS deal like it. He said exactly that:

He came very close to using his veto, and yes, he gave it serious thought.

In the end, if it were not for the military gains, which were more than had been seen for a long time, he would have sent the bill back.

This bill was a hell of a mixed bag, with competing priorities. Some things about it were absolutely a necessary priority. That included military buildup and pay raises.

There were many things that absolutely disgusted him, without which, the military funding would not be funded. Horse trading, pork projects, and projects that he called ‘a waste of money’.

He called out the budget for being rushed, and a bill that was not even read by so many people.

He also said he will not do an omnibus like this again.

He would like a line-item veto, to scrap bogus additions to omnibus bills.

Give them something that will ‘awaken their inner badass’.