Black History month came and went, and now we’ve got a few questions for the Congressional Black Caucus.

Like how can they possibly square who they CLAIM to be with current events or their record? But wait, let’s back up a little.

Maybe someone can clarify the things that aren’t adding up. I love America. I write about America. I even lived in America for several years. And as part of the Clashdaily team, I regularly write pieces about the American news cycle.

But, as a Canadian, I’m not really used to ‘race’ being ‘THE’ defining issue in politics.

I ‘get’ that there’s a lot of complicated history there, but between MLK becoming a hero with his own national holiday and with a white-majority population electing a Black President, you’d think that would be more or less resolved by now.

If anything, America seems far MORE racially polarized than it was before #44. Go figure.

But as a friendly foreign observer, the very existence of a Congressional Black Caucus leaves me scratching my head. Whatever happened to “not be judged by the color of their skin, but by the content of their character.”

The claim is going to be that they are representing the interests of Black Voters.

Some uncomfortable questions for the Congressional Black Caucus

Posted by The Republicanuck on Thursday, March 8, 2018

Let’s pretend, for the moment, that I actually believe that claim.

You make a big show of denouncing the ‘racist’ President. I don’t see it, nor do a lot of commentators — including many that are not white. But you’re convinced it is true, or at least play politicians who do on TV.

You spend so much time crying racist, and yet, at every turn, we find yet another connection between you guys and that open racist, Louis Farrakhan.

And you’ve been part or ‘the resistance’. You dressed up for the State of the Union to display your defiance. But what did your ACTIONS tell us? They told us that you were not that interested or pleased to hear that unemployment numbers are approaching record lows. Including black unemployment.

It’ was bad news for you politically… but for anyone looking for honest work, that’s fantastic news!

You never even cracked a smile.

Because you hate Trump more than you love American citizens.

And then there was a sad moment when two pairs of grieving parents were called up. We heard about their young daughters, ruthlessly attacked for no reason at all. By gang members who were in America illegally.

And you insulted the grieving parents by sitting on your hands.

Because you hate Trump more than you love American citizens — even black ones.

And then along came February. There were two issues that we really heard anyone talk about.

The first one was DACA. And everyone used that to paint Republicans as racists. But we had already seen your politicizing of this issue when you refused to acknowledge those two slain girls.

The second one was the gun control issue that has sprung up after the Florida school shooting.

Are you seriously pushing for a ban on the AR-15?

The most current statistics for Chicago — according to the very detailed city gun stats website ‘HeyJackass‘ tells us how often they are seeing shootings and murders: 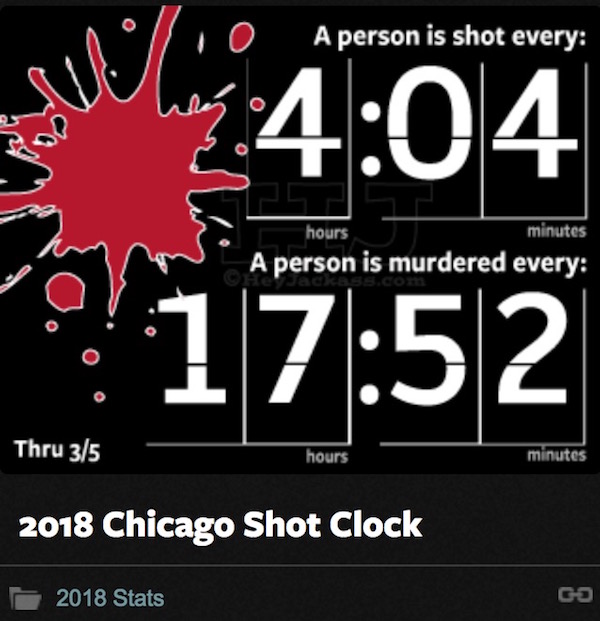 Dana Loesch caught hell for claiming the networks and politicians loved to have crying white women as tools to exploit for their own political ends. But for all the national outrage we saw there, wanting to ban rifles (which kill fewer people than knives, hand and feet), she has a point.

These weren’t scary black rifles. These weren’t crying white moms. And the Democrats had nothing whatsoever to say about them.

How did the Congressional Black Caucus fall in step behind outlawing the AR-15 which made a big headline because the victims all happened to be killed by the same punk when they have been silent about the rampant murder by on the streets of major urban centers like Chicago or Baltimore by people, many of whom are disqualified from owning a firearm in the first place, and sometimes are not even lawfully in America.

These murders weren’t even rifles, let alone ‘high capacity’ or ‘scary black ones’.

Mostly they were handguns, from the black market, probably. So your call to ban AR-15s doesn’t actually help your own supposed ‘black constituency’ you claim to represent any more than your rigorous defence of DACA and general opposition to border control helps them.

At least the Florida shooting murder was solved. In Chicago, for instance, you have a 71% chance of LITERALLY ‘getting away with murder’… meaning that there is only a 29% conviction rate for murders.

But your main focus is on school shootings. Bravo.

Whose interests are you REALLY representing?

It’s obvious to me that your allegiance is to the party, and your backers.

It is clearly not to the interest groups you are trying to leverage for political gain.