Do you remember when Jim Carrey was funny? He’s now an artist and he’s very, very serious.

And, just like a lot of his Hollywood cohorts, he’s a Democrat shill, I mean, ‘political’.

Carrey has taken a break from acting to focus on his art — he paints and sculpts.

In his art, he doesn’t hide his disdain for President Trump as seen in this painting: 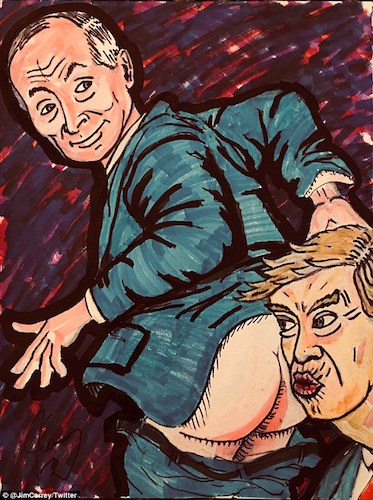 Next in the crosshairs was Sarah Huckabee Sanders.

Carrey painted a caricature of 35-year-old Huckabee Sanders depicting her as a angry-looking woman complete with a ruddy complexion and furrowed brow.

The actor shared the painting online this weekend. It is clear he is not a fan of her or her boss, although he didn’t mention her specifically by name in his tweet.

He captioned his artwork: ‘This is the portrait of a so-called Christian whose only purpose in life is to lie for the wicked. Monstrous!’
Source: Daily Mail

Said by the ‘so-called comedian’ that was pushing a debunked anti-vaccine conspiracy theory linking vaccines to autism.

So, what did Lloyd from Dumb and Dumber paint?

Well, for one, the style is very… how shall we say it… child-like. 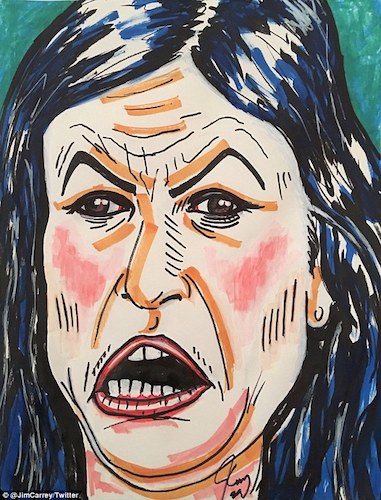 Carrey has painted several other portraits, including those of historical figures.

Here is one of Abraham Lincoln crying over the state of the nation: 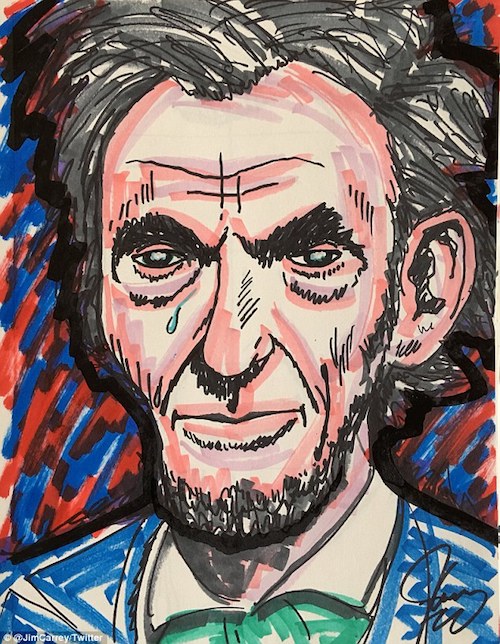 Perhaps Carrey, who is Canadian, doesn’t know that President Lincoln was, in fact, a Republican.

It’s always a good idea to get your political information from a guy that became famous for stellar acting like this:

It’s one thing to criticize the President’s policies, but to attack his Press Secretary is just disgusting.

Can you imagine if someone did something similar with the subject being Jay Carney when he dodged Jake Tapper’s questions about the Benghazi attack:

No one would ever do that.

By the way, where are the feminists rushing to the defense of the ‘bullying’ of Sarah Huckabee Sanders by a ‘privileged white male’?

If Carrey is pondering a return to his acting career, perhaps he should rethink things.

Fans are not impressed.

Apparently you misunderstand the definition of Christian. It's certainly not what #Hollywood thinks!

And this is the picture if a has-been, who hasn't put out a decent movie in 15 years: pic.twitter.com/ZDQJ4AXysR

Hollywierd has gone totally insane. I have unplugged. Got better stuff to do in reality

Nothing worse than an entertainer trying to be political. Then again its been over 20 years since you were entertaining. So sad.

Jim’s nothing but a bitter old dude these days. No one cares…

un-hindged bullying by the left , Democrats, while telling kids bullying is a bad thing… the adults are acting like the mean children, do as I say , not as I do ?? Hypocracy at it's finest, Jim probably doesn't know how funny this really is…ILMAO

Or maybe have a chat with Dolly Parton before he takes another shot in front of the camera.