That don’t hit a kid card won’t fly when the guy taking him down is younger … and has a thousand times more class.

We’ve all seen the type before.

The skinny kid in school that taunts the big guy because he thinks he can out-run them. Or who hides behind the teacher’s skirt and sticks his tongue out. Or he finds some other reason to make him immune to school-yard retribution — and he milks it because he’s arrogant and nobody dares him in his place.

We’re looking at a guy who snipes with impunity at actual adults who — through hard work and dedication — have EARNED public respect. At the same time, he demands to be taken seriously, like an adult.

Then he decides to piss and moan about it on his own social media — making it a matter of public record because he’s a ‘blue-check’ twitter user, and damned proud of that fact. When someone treats it like ‘news’, he goes ballistic and sets out to personally destroy them. (Laura Ingraham, reported here.)

The same kid who refuses to get into a proper policy debate with another Douglas survivor — Kyle Kuschev is attacking the character of anyone who dares disagree with him. And if they challenge him on anything that HE has made a public issue of — including all the schools that haven’t accepted him, because his SAT scores are below their threshold he turns his media attack mob against them.

Because ‘how dare you hit a kid’. Stuff like this gets under his skin: 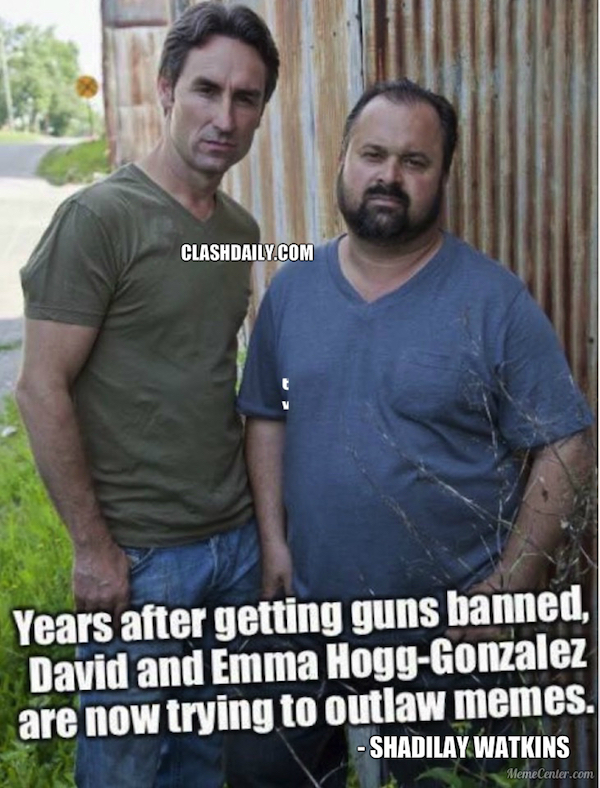 Now we get to see what he’s really made of — when he can’t pretend a big mean grown-up is harassing him. C.J. Pearson — remember him? — just came out to play.

With grace and class, a younger famous ‘kid’ is telling Hogg to put on his big boy pants.

.@davidhogg111 wants to be a public figure, tear the #2A into shreds, and be the self-proclaimed voice of my generation but can't take a little criticism from Laura Ingraham? There's no safe spaces in politics, David. Grow up. pic.twitter.com/XwZuPFC1KY

The public spotlight is optional. He signed up for the fame. He chased the spotlight. He’s enjoying the political power and publicity. Fame is a drug that tells you are important.

But it comes at a price. You stick your neck out… and someone is going to disagree with you. And that is THEIR right, too.

And C.J. puts that in perspective, beautifully.

Here’s part of what he said:

You know, I’m fifteen years old. I’m young, I’m black and Republican. I’m literally three things that make liberals lose sleep at night. They hate me. They hate me because I buck every single narrative that they would like the American people to believe.

“Oh, if you’re black, you gotta be a Democrat.”

They hate me, and because they hate me they call me things like “Uncle Tom,” “House Negro,” “sellout” — all these hateful, deplorable things.

But guess what? I turn the other cheek. Why? Because these people can tweet at me and criticize me all day long, but I fight for what I believe and I will continue to do so regardless of anything that I’m called.

Step up, and take it like the man that he is presenting himself to the world as being.

Or — if he’s not yet ready to live in a man’s world, and hides behind being ‘just a kid’ — take a seat until he is ready.

But picking fights, and then crying foul when someone hits you back? That’s not what adulthood looks like.

Not even close. Someone who knows and cared about Hogg should tell him something like this:

That fame is voluntary. If you’re ready to pay the price, go ahead… step up and embrace the mace. If not, sit down until the time that you are ready.

Stop trying to destroy everyone who dares to think differently than you.

There are people in this world like that. We call them ‘authoritarians’.

Look up history, you will find that they’re not nice people. So don’t be like them.