While society rages about the ‘war on women’, stats that point to a bigger problem are starting to pile up.

Who is the go-to whipping-boy in any narrative in the Intersectional victim Olympics?

I guarantee that you don’t hear a message like this one in modern, progressive, effeminate churches:

Dear Christian Males: God Wants You To Act Like A MAN And NOT …

Dear Christian Males: God Wants You To Act Like A MAN And NOT A Prancing Dandy

Posted by Warriors And Wildmen on Friday, November 10, 2017

Men get a part to play in the drama, but unless there is some other box they can check off — sexuality, race, non-conforming religion, disability — we are ‘the problem’. The ‘patriarchy’.

There is even a Canadian magazine currently on shelves that drives that point home pretty clearly: 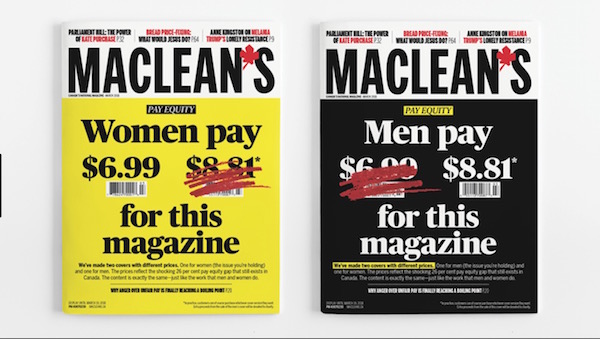 Chances are, they even think they’re righting a wrong in the process.

Not according to a stack of stats that Tucker Carlson brought up. And the issue goes way deeper than pay scales and glass ceilings.

Here are some excerpts from the video:

Start with the most basic, life and death. The average American man will die five years before the average American woman. One of the reasons for this is addiction. Men are more than twice as likely as women to become alcoholics. They’re also twice as likely to die of a drug OD. In New Hampshire, one of the states hit hardest by the opioid crisis, 73 percent of overdose deaths were men.

…But the saddest reason for shortened life spans is suicide. Seventy-seven percent of all suicides are committed by men…

…Over 90 percent of inmates are male…

…Women decisively outnumber men in graduate school. They earn the majority of doctoral degrees. They are now the majority of new enrollees in both law and medical schools…

…Perhaps most terrifyingly, men seem to be becoming less male — fundamentally, measurably. Sperm counts across the west have plummeted, down almost 60 percent since the early 1970s. Scientists don’t know why. Testosterone levels in men have also fallen precipitously. One study found that the average levels of male testosterone dropped by 1 percent every year after 1987. And it is unrelated to age. The average 40-year-old-man in 2017 would have testosterone levels 30 percent lower than the average 40-year-old man in 1987….

It’s a long list that covers a lot more than just those points.

The full transcript from the Facebook page is below, if you prefer to read it.

For formatting reasons, the quote will be split into smaller blocks.

You hear a lot in America about the “war on women,” but it’s men in America who are failing. We have some shocking statistics:

The signs are everywhere. If you’re a middle aged man, you probably know a peer who has killed himself in recent years. At least one. If you’re a parent, you may have noticed that your daughter’s friends seem a little more on the ball than your son’s. They get better grades. They smoke less weed. They go to more prestigious colleges. If you’re an employer, you may have noticed that your female employees show up on time, whereas the young men often don’t. And of course if you live in this country, you’ve just seen a horrifying series of mass shootings, far more than we’ve ever had. Women didn’t do that. In every case, the shooter was a man.

Something ominous is happening to men in America. Everyone who pays attention knows that. What’s odd is how rarely you hear it publicly acknowledged. Our leaders pledge to create more opportunities for women and girls, whom they imply are failing. Men don’t need help. They’re the patriarchy. They’re fine. More than fine.

But are they fine? Here are the numbers:

Start with the most basic, life and death. The average American man will die five years before the average American woman. One of the reasons for this is addiction. Men are more than twice as likely as women to become alcoholics. They’re also twice as likely to die of a drug OD. In New Hampshire, one of the states hit hardest by the opioid crisis, 73 percent of overdose deaths were men.

But the saddest reason for shortened life spans is suicide. Seventy-seven percent of all suicides are committed by men. The overall rate is increasing at a dramatic pace. Between 1997 and 2014, there was a 43 percent rise in suicide deaths among middle aged American men. The rates are highest among American Indian and white men, who kill themselves at about ten times the rate of Hispanic and black women.

You often hear of America’s incarceration crisis. That’s almost exclusively a male problem too. Over 90 percent of inmates are male.

These problems are complex, and they start young. Relative to girls, boys are failing in school. More girls than boys graduate high school. Considerably more go to and graduate from college. Boys account for the overwhelming majority of school discipline cases. One study found that fully one in five high school boys had been diagnosed with hyperactivity disorder, compared with just one in 11 girls. Many were medicated for it. The long term health effects of those medications aren’t fully understood, but they appear to include depression in later life.

Women decisively outnumber men in graduate school. They earn the majority of doctoral degrees. They are now the majority of new enrollees in both law and medical schools.

For men, the consequences of failing in school are profound. Between 1979-2010, working age men with only high school degrees saw their real hourly wages drop about 20 percent. Over the same period, high school educated women saw their wages rise. The decline of the industrial economy disproportionately hurt men.

There are now seven million working age American men who are no longer in the labor force. They’ve dropped out. Nearly half of them take pain medication on any given day. That’s the highest rate in the world.

Far fewer young men get married than did just a few decades ago, and fewer stay married. About one in five American children live with only their mothers. That’s double the rate in 1970. Millions more boys are growing up without fathers. Young adult men are now more likely to live with a parent than with a spouse or partner. That is not the case for young women. Single women buy their own homes at more than twice the rate of single men. More women than men now have drivers licenses.

Whenever gender differences come up in public debate, the so-called wage gap dominates the conversation. A woman makes 77 cents for every dollar a man earns. That’s the statistic you’ll hear. It’s repeated everywhere. But that number compares all American men to all American women across all professions. No legitimate social scientist would consider that a valid measure. The number is both meaningless and intentionally misleading. It’s a talking point.

Once you compare men and women with similar experience working the same hours in similar jobs for the same period of time — and that’s the only way you can measure it — the gap all but disappears. In fact it may invert. One study using census data found that single women in their 20s living in metropolitan areas now earn eight percent more on average than their male counterparts. By the way, the majority of managers are now women. Women on average are scoring higher on IQ tests than men are.

Men are even falling behind physically. A recent study found that almost half of young men failed the Army’s entry-level physical fitness test during basic training. Fully seventy percent of American men are overweight or obese, as compared to 59 percent of American women.

Perhaps most terrifyingly, men seem to be becoming less male. Sperm counts across the west have plummeted, down almost 60 percent since the early 1970s. Scientists don’t know why. Testosterone levels in men have also fallen precipitously. One study found that the average levels of male testosterone dropped by one percent every year after 1987. This is unrelated to age. The average 40-year-old-man in 2017 would have testosterone levels 30 percent lower than the average 40-year-old man in 1987.

There is no upside to this. Lower testosterone levels in men are associated with depression, lethargy, weight gain and decreased cognitive ability. Nothing like this has ever happened. You’d think we’d want to know what exactly is going on and how to fix it. But the media ignore the story. It’s considered a fringe topic.

Nor is it a priority in the scientific research establishment. We checked and couldn’t find a single NIH-funded study on why testosterone levels are falling. We did find a study on, quote, “Pubic Hair Grooming Prevalence and Motivation Among Women in the United States.”

Those are the numbers. They paint a very clear picture: American men are failing, in body, mind and spirit. This is a crisis. Yet our leaders pretend it’s not happening. They tell us the opposite is true: Women are victims, men are oppressors. To question that assumption is to risk punishment. Even as women far outpace men in higher education, virtually every college campus supports a women’s studies department, whose core goal is to attack male power. Our politicians and business leaders internalize and amplify that message. Men are privileged. Women are oppressed. Hire and promote and reward accordingly.

That would be fine if it were true. But it’s not true. At best, it’s an outdated view of an America that no longer exists. At worst, it’s a pernicious lie.

Either way, ignoring the decline of men doesn’t help anyone. Men and women need each other. One cannot exist without the other. That’s elemental biology, but it’s also the reality each of us has lived, with our parents and siblings and friends. When men fail, all of us suffer. How did this happen? How can we fix it? We hope this series answers those questions. #Tucker Fox News

If we think these issues are unimportant, we will only see their negative outcomes become compounded.

And if you think a problem that affects half of our population won’t impact the other half, you’re just not paying attention.