Abortion opponents around the nation have a reason to applaud, because Mississippi has proposed a new law to ban abortion after 15 weeks. According to the Associated Press, the state’s Governor Phil Bryant, has expressed excitement in signing the law into law. Could this be an important turning point in the battle to protect the life of the unborn? Just look at what President Trump’s administration has already done so far.

The Department of Health and human Services (HHS) took a major step toward declaring that life begins at conception. In its new HHS 2018 to 2022 strategic plan, it states that life actually begins at conception, reported The Hill. Not only is this a major boost for the pro-life movement, but most important is how the president’s effort can save hundreds of thousands of unborn lives.

Who sits in the Oval Office is critical and equally critical is who sits in the governor’s office as well. That is why pro-life governor’s like Mississippi Governor Phil Bryant are so important to building a critical foundation for unborn life. The Anti-abortion group Pro-Life Mississippi is highly supportive of the new bill, stating, fetuses in the womb “deserve the right to life, which is supported by this bill,” according to the AP. The organization said it appreciated the stand for life that the legislators took to vote for anti-abortion bills “that are grounded in science and protect human life.”

Of course, the abortionists are attacking the pro-life bill which protects the life of the unborn. American Civil Liberties Union of Mississippi Executive Director Jennifer Riley Collins is critical of the bill, stating that the law will, “seriously harm low-income women, women of color, and young women.” She concluded, that the “real agenda” of lawmakers is to ban abortion altogether,” reported the AP.

Ending abortion and protecting the life of the unborn is one of the major goals of Judi Lake, Executive Director of the American Christian Civil Rights Movement (ACCRM). The state of Mississippi has taken a major step in protecting the life of the unborn and each one of us who support life must support it. Just as President Trump’s HHS has declared that Life Begins at Conception, we must stand up and do more and join Mississippi’s battle to carry the fight to do more in every other state in America. 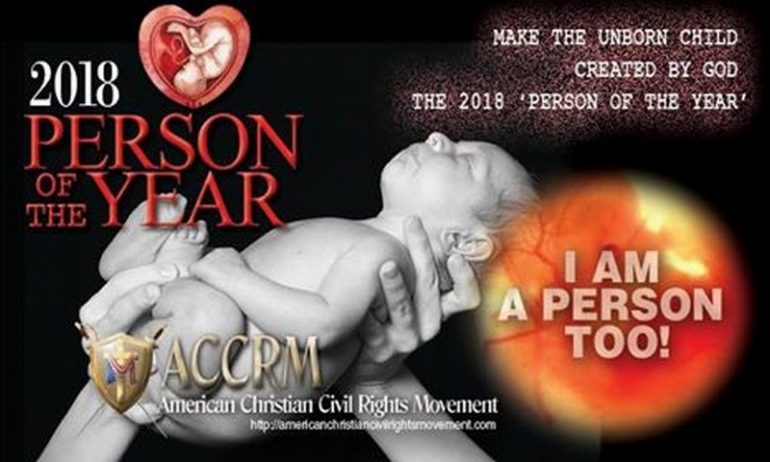 Expect abortion battleground Mississippi to not take the new law sitting down. Adrienne Kimmell, vice president of communications and strategic research for the national nonprofit NARAL Pro-Choice America, will use the new pro-life bill to stir up national opposition to unborn rights. She stressed, that the bill brings Mississippi women “one dangerous step closer to losing their constitutional right to access abortion.” In short, she is saying that Mississippi’s effort to bring the unborn, constitutional right to life one step closer in line with the president’s HHS is a clear and present danger. It is a choice; pro-life supporters gladly accept.

Each step toward reaching the fulfillment of a total U.S. constitutional protection of the life of the unborn at conception is essential. Recognition of U.S. Constitutional Due Process protection for the unborn must become a reality.

Meanwhile Republican Gov. Phil Bryant has reiterated his pledge to sign the bill and stated, he wants “Mississippi to be the safest place in America for an unborn child.” Mississippi is not silent on protecting the life of the unborn. According to ACCRM Lake, “We cannot afford to be silent. Silence is Betrayal.”