The left is eating its own. And in this case, it’s probably served with a nice aioli.

Or maybe it’s ‘Donkey Sauce’ in this case.

We know all about Alec Baldwin’s disdain for the President.

Did you remember that Bourdain had (perhaps jokingly) said that he would put poison in President Trump’s food?

These two anti-Trump jackasses were clashing on Twitter back in November over the #MeToo movement.

But Baldwin has continued to weigh in on #MeToo and Bourdain has had it.

Anthony Bourdain has advised Alec Baldwin to keep his opinions on the #MeToo campaign to himself.

‘Just shut up,’ was the chef and travel writer’s succinct advice for the comedian, who has repeatedly weighed in on the movement highlighting sexual harassment and assault.

Yes, we all want Alec Baldwin to shut up.

Bourdain’s partner is Asia Argento, one of the first women to come forward and accuse Harvey Weinstein of sexual misconduct.

Bourdain’s partner, Asia Argento, who was one of the first to speak out against  Weinstein, called Baldwin out for comment on Twitter, tweeting: ‘Hey AlecBaldwin you’re either a complete moron or providing cover for your pals and saving your own rep. Maybe all three.’ 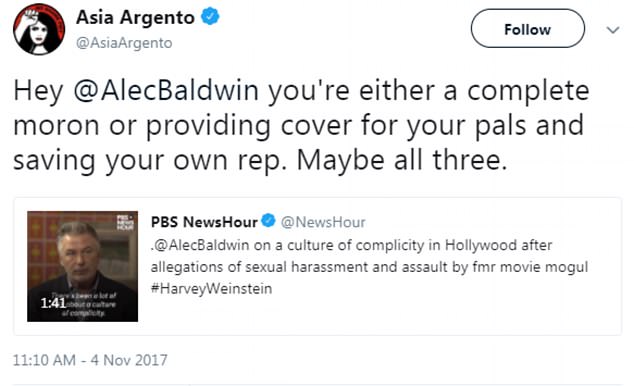 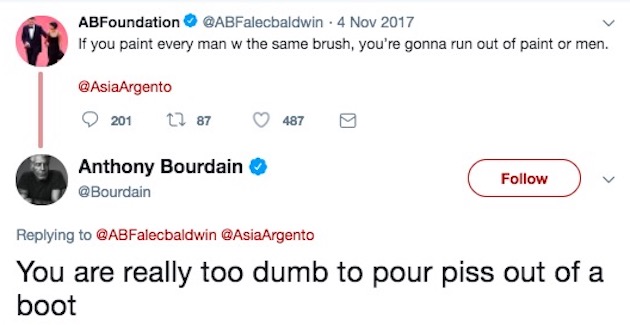 Well, one thing is for certain, Anthony Bourdain is creative in his scathing insults.

He’s supportive of his girlfriend and what she’s going through.

‘When someone you care about and respect, you see them struggle to go on the record—the incredible difficulty of going public about something, and the very real peril at the time—it changes you,’ Bourdain said.

‘When Asia spoke to Ronan [Farrow], I think she might have been the first to go on record knowing with absolute certainty that she would most likely be sued, destroyed, crushed by this gigantic machine that had for decades been crushing far more powerful people than her who dared speak up. But she did it anyway. So to see that, and to see the blowback in Italy where she’s received no support, has been eye-opening.’

Bourdain is also careful to not make it all about him as he apparently sees Baldwin doing.

‘It’s something I’m very aware of when I hear myself talking about it—it makes me very uneasy,’ he said. ‘These are not my stories, so I feel that every time I’m talking about it I’m taking up space that should be rightfully taken by a woman. It’s a fine line for me. I don’t particularly enjoy talking about it. But if you ask me, I’ll tell ya.’
Source: Daily Mail

This is going to be a fun one to watch.