Early reports of this being a woman angry at a boyfriend were incorrect.

The woman has been identified as a Persian (ie. Iranian) woman who supported PETA, was an animal rights activist and was a vegan bodybuilder that was angry with YouTube for demonetizing her exercise videos.

Her father had contacted the police when she went missing a couple of days ago. He told them that she was angry with YouTube and because they had ‘stopped everything and now she has no income’.

She was found near the Google headquarters sleeping in her car on Monday night.

The woman behind a mass shooting at YouTube’s headquarters has been identified as an animal rights activist who claimed the company censored her channel.

Funny how the initial reports were that it was more of a relationship issue.

…On her now defunct YouTube page, the 39-year-old described herself as “the Persian Azeri female vegan athlete and animal rights activist promoting VEGANISM, the healthy and humane way of living.”

I'm waiting for all the leftists to retract their statements about NRA and blaming Conservatives. pic.twitter.com/BzwucnedCo

She was popular within the Persian and Turkish communities.

“Nasim is the well known and most famous animal rights activist in persian / turkish community.”

Her ab workout video was restricted and she complained about censorship. Here is a video of her complaining about it:

Perhaps it was because there were complaints about her video being ‘inappropriate’ from the community that she was popular with. After all, they’re the ones that are keen to have women covered from head to toe, amirite?

Early reports were that the shooter may have targeted a boyfriend but it is now understood Aghdam was not known by anyone at YouTube.

CBSNews said Aghdam’s father Ismail told them his daughter had been missing for several days and he’d told police she was “angry” at YouTube.

He said police contacted him to say Aghdam had been found in Mountain View, where Google has its headquarters, on Monday night.

Mr Aghdam said YouTube “stopped everything and now she has no income.”

She chose her victims randomly.

That angry-girlfriend-shoots-boyfriend narrative unraveled rather quickly, didn’t it? The Media (D) was all over this yesterday, but it’s now been dropped like a hot potato.

News footage showed people leaving in a line with their hands in the air as police checked for weapons.

The situation is now over, and initial reports are that the shooter was a woman that opened fire on her boyfriend and injured several others in the process.

It is believed that the shooter has taken her own life, but that has not yet been confirmed.

A woman who police believe opened fire at YouTube headquarters in Northern California has been found dead from an apparent self-inflicted gunshot wound, authorities said.

There are multiple victims. San Francisco General Hospital said it has three patients from the shooting, including one in critical condition. Northern California’s Stanford Hospital said it has received four to five patients, but a hospital spokeswoman did not have information on their conditions or their wounds.

Listen to the CNN report:

Re: YouTube situation, we are coordinating with authorities and will provide official information here from Google and YouTube as it becomes available.

Was just briefed on the shooting at YouTube’s HQ in San Bruno, California. Our thoughts and prayers are with everybody involved. Thank you to our phenomenal Law Enforcement Officers and First Responders that are currently on the scene.

Just so you all know, an armed teacher wouldn't have stopped the shooter at YouTube HQ 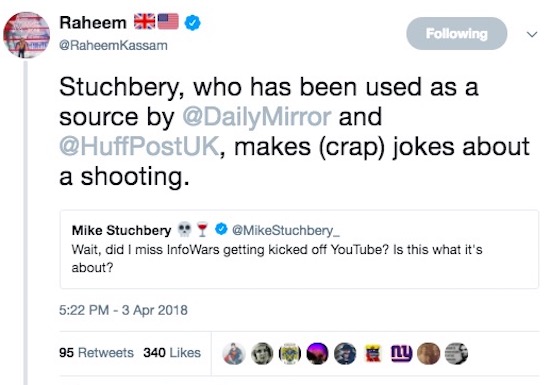 Another shooting.
I'm going to politicize the fuck out of it, and so should you.
The NRA is a terrorist organization. https://t.co/UsoQBIxWpf

Well, just because the leftists won’t offer thoughts and prayers, it doesn’t mean that we won’t.

Also, please note that Brianna Wu wants to start her own crap version of the NRA.

That’s because she has no idea what the NRA is all about. She probably thinks it’s all about selling guns and profiting from the ‘blood of the children’ or something.

You know how crazy leftists are.

But hey, at least one guy got it wrong.