Well, if you’re just learning about this now, take a wild guess as to which party they were funding.

If it had been the Republicans this would be front-page news.

The federal government has seized and shut down the classified website Backpage.com in a crackdown relating to President Trump’s efforts on ending child trafficking.

The website was known for its lewd ads of young and sometimes underage girls and was a ‘sex marketplace’.

It is alleged that the website even edited the ad content in order to conceal that they were knowingly posting ads for sex with children.

era, you’d think that there would be some support from the left side of the aisle.

The feds have been trying to shut down the site since it launched in 2004.

It was reported that the home of one of the founders, Michael Lacey, was raided by the FBI in relation to the investigation.

BREAKING: @FBIPhoenix has confirmed that the Sedona home of former @phoenixnewtimes publisher and https://t.co/PHFHf52Sij founder Michael Lacey was raided this morning. 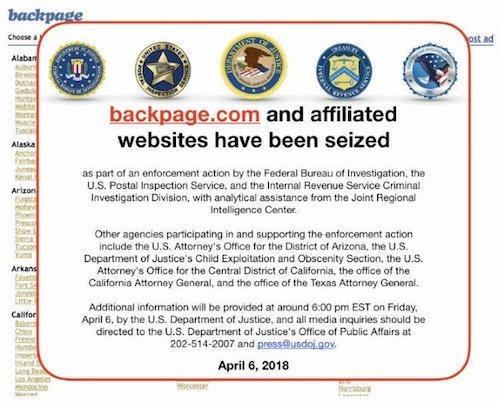 They contributed over a hundred thousand dollars since 2013.

But even as their legal problems have grown, the two men who started the Phoenix New Times in 1970 have become local philanthropists and political donors to Democrats in Arizona, New Mexico and Colorado.

All told, the two men have made federal and state political contributions of $162,200 since 2013 — $60,200 of that to Arizona politicians and political committees, and $10,600 of that to U.S. Rep. Kyrsten Sinema in 2013 and 2016, according to an analysis of state and federal campaign-finance records. She was the biggest individual beneficiary of their donations in Arizona.

They made donations to both Hillary’s campaign and Nacy Pelosi’s SuperPAC as well as other Democrats.

Neither of the big name Democrat women returned the money.

The Arizona Democratic Party took $40,000 from the two men last year [2016], three months before they faced their first criminal charges in California. Asked if the party intended to keep the $40,000, a spokesman, Enrique Gutiérrez, said the money had already been spent.

The Frontera Fund, which the two men started in 2014, says it has donated money to 22 charities listed on its website, most of which support immigrants’ rights.

And by ‘Immigrants’ they mean ‘illegal aliens’.

Of course they do.

Director of Communications and External Affairs for the Arizona GOP, Ayshia Connors, tweeted this:

What do you think was the response she received?

Do you think that Krysten Sinema is going to return the money?

Right after Hillary and Nancy Pelosi do.

Which seems to be around the time that hell freezes over.