And this student isn’t Kyle Kashuv…

We’re talking about Patrick Petty. Haven’t heard of him, you say?

As the Washington Times puts it, Hogg could’ve made a pretty good brownshirt:

Hogg would’ve made a pretty decent brownshirt back in the pre-World War II day. Those are the National Socialist party people who ran around Germany strong-arming and bullying and intimidating the general populace into accepting the goals of the Nazi organization. Not saying Hogg’s one now — goodness, no. There are advertisers to consider, of course.

Just saying his demeanor, his rhetoric, his whiney demands, his illogical views of the Second Amendment, his refusal to consider facts and historical truths over emotionally charged screams — all that, added up and considered, suggests he may have missed his calling by a few decades, and an Atlantic Ocean.

Here is Patrick Petty with Kyle Kashuv when they went to Washington on March 13 to discuss the STOP School Violence Act: 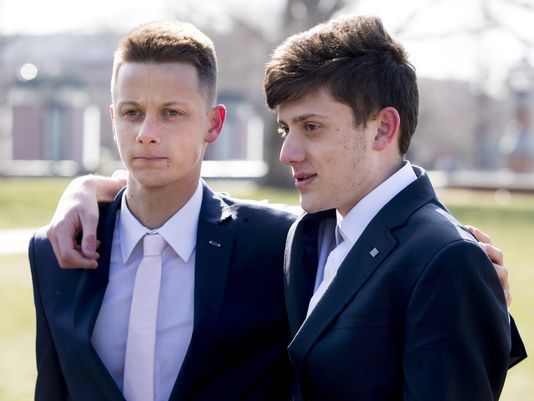 I find it funny that @davidhogg111 wants people to show him love while being nasty and vile to others. Worse than that, he and his friends have not said a word to me since the shooting, considering my sister died on 2/14 don’t you think it would’ve been loving to reach out to me? https://t.co/8Gn3UsatjI

Sorry for your loss. Unfortunately your narrative doesn't fit what they are preaching. Stay strong.

I’m so very sorry for your loss. You and your family have been in my prayers and thoughts nonstop. You & @rpetty are truly role models for the future on how to correct and adjust the system to prevent future potential tragedies. God bless you all.

I am so sorry….thank you for taking the road less traveled. God bless you.

My deepest condolences on the loss of your sister, Alaina. God Bless you and your family.

Your sister is a hero. She made that casualty count lower than it could have been. Cherish the fact that u can remember your sister for the heroic, caring person that she obviously was. You're better than hogg and crew. They care nothing about the victims.

Petty, like Kashuv, want to debate what to do about school shootings, but believe the problem to be complex and multi-faceted. 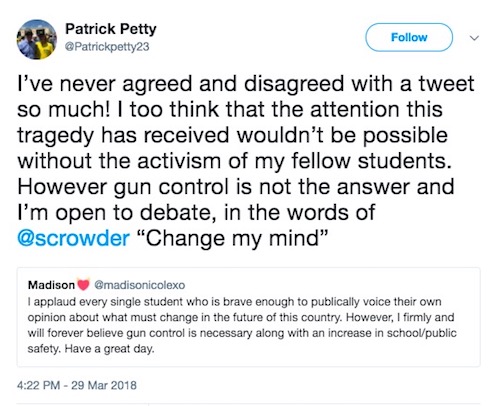 Here’s another voice we’ve not been hearing from:

A miscommunication led to Hunter not being able to speak at the march… I would like you to hear it now at this bea https://t.co/3FzEsAtbqQ

Please share this video so as many people as possible can hear this beautiful message… We need an intersectional approach to this issue to save as many lives as we can. This isn’t left or right, it’s about saving lives. Through unity and love we will win and end gun violence.

Not everyone thinks so. 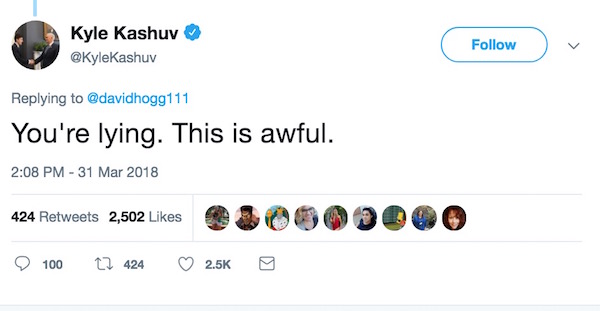 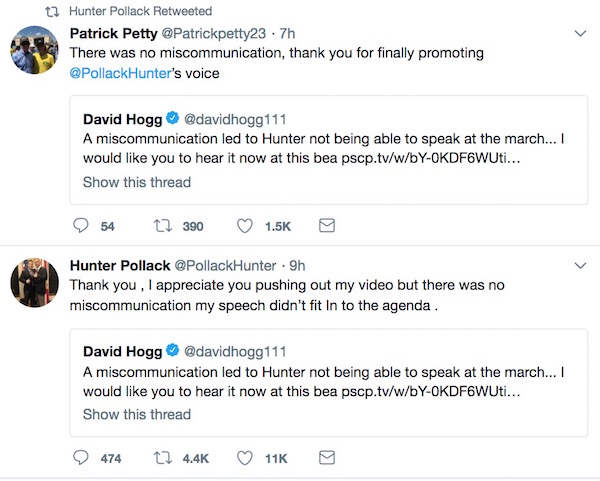