Women were willingly sex slaves for their own ’empowerment’ in this cult.

Keith Raniere had a helluva thing going for him. He made himself a guru, was backed (for a while) by some pretty big bucks like Richard Branson and the heiresses to the Seagram’s liquor fortune. His Albany, NY cult, NXIVM, even hosted the Dalai Lama.

He even had a ‘special branch’ of Nxivm for women called Jness.

But it all came crashing down when some former members broke their silence on what was actually happening in the cult.

Raniere was arrested in Mexico for alleged forced labor and sex trafficking.

Allison Mack, the former Smallville star, has been arrested along with Raniere. She was allegedly the second in command and actively recruited women to become sex slaves through Jness.

The 35-year-old is accused of recruiting slaves into the secretive Nxivm cult before its founder Keith Raniere allegedly subjected them to humiliating acts.

Raniere’s and Mack’s initials were branded onto the pelvic area of women who joined the organisation, which has a large base in Albany, New York.

Now it has emerged Mack tried to recruit Harry Potter actress Watson, 28, and singer Clarkson, 36, both known for championing feminism and supporting women’s rights, into the degrading cult.

Mack reportedly tweeted the pair about an ‘amazing women’s movement’ and invited them to have a ‘chat’ with her about it.

‘I’m a fellow actress like yourself & involved in an amazing women’s movement I think you’d dig,’ Mack wrote to Watson in January 2016. ‘I’d love to chat if you’re open.’

The next month she tweeted the star again, writing: ‘I participate in a unique human development & women’s movement I’d love to tell you about.’

Three years earlier she wrote to Clarkson: ‘I heard through the grapevine that you’re a fan of Smallville. I’m a fan of yours as well!’ she wrote. ‘I’d love to chat sometime.’ 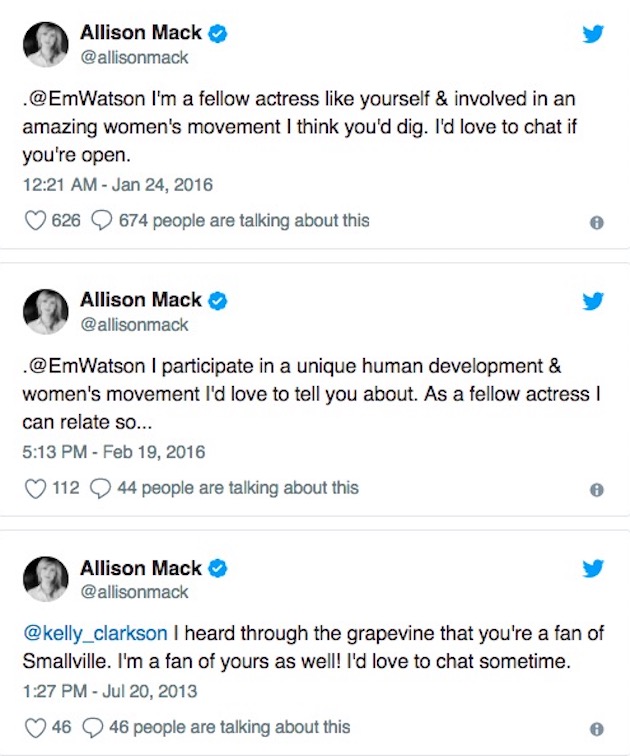 The disturbing goings-on inside the organisation was exposed after two former members, known as Jane Doe 1 and Jane Doe 2, spoke out.

How messed up do you have to be to think that the ultimate form of Feminism is to be a sex slave?

Was Mack ’empowered’ through Jness by essentially becoming a ‘Madam’ and literally branding women like cattle in their genital region?

At the 4-minute mark of her recruitment video, Mack says that she ‘needed to experience herself in her life’.

What does that even mean?

Actually, now that I think about it… that’s something that we can all relate to, amirite?

For the majority of my time slogging along on this pebble, I’ve been experiencing my life as an 80-year old Chinese woman. It’s really confusing because I don’t speak the language at all, but I must admit — I do make a mean sticky rice.

Mack referred to herself as Raniere’s ‘slave’ and he as her ‘master’.

She has been serving as leader of the cult since Raniere, 53, was arrested in Mexico, where many high-profile members fled earlier this year.

They both deny federal charges of sex trafficking and conspiracy to commit forced labor.

US Attorney Richard Donoghue released a statement which stated:

As alleged in the indictment, Allison Mack recruited women to join what was purported to be a female mentorship group that was, in fact, created and led by Keith Raniere.

The victims were then exploited, both sexually and for their labor, to the defendants’ benefit.

This Office and our law enforcement partners are committed to prosecuting predators who victimize others through sex trafficking and forced labor.
Source: Daily Mail

It should be noted that Raniere is being held without bail because the US Attorney’s office told the court that the cult leader had previously had a sexual relationship with two female minors aged 12 and 15.

Both Mack and Raniere are facing possible life in prison.

I’ll bet those Jane Does that have come forward wished that someone had saved them from this brand of feminism.

Fight back against the insanity.

Here’s a fantastic way to start: