It’s all about ‘safety’ and not about suppressing gun rights, eh? Tell that to these honor students.

While everyone else was still whipped into a frenzy about the ‘difference’ a cherry-picked few of the Parkland HS students were making on the National Stage, something else was happing to students in New Jersey.

They were being punished by their school for their lawful use of firearms.

Yes, you read that correctly. Punished by their school for LAWFUL use of firearms.

In fact, they even missed some AP exams they had paid for over it. 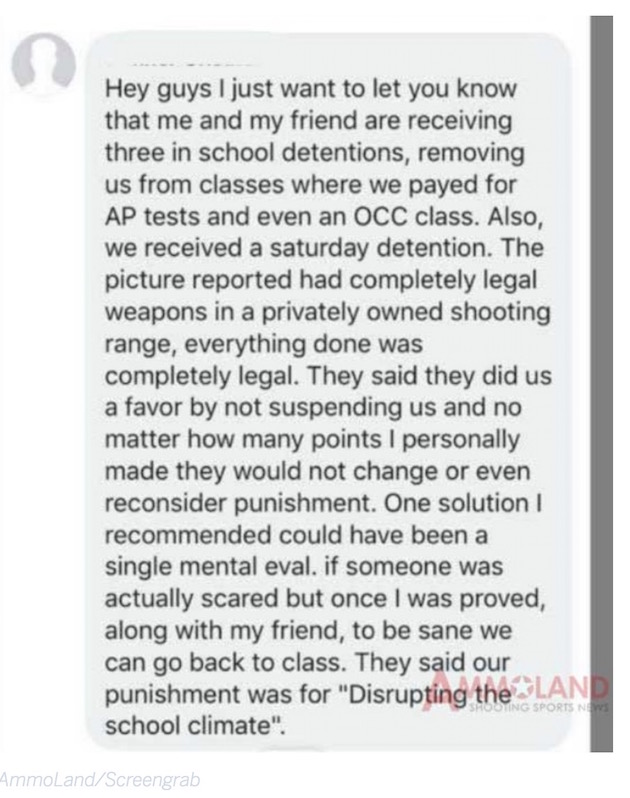 Their punishment was for ‘disrupting school climate’.

They were removed from classes where they had paid for AP tests. They were given Saturday detentions.

We’ve got images of documents from the school, too. 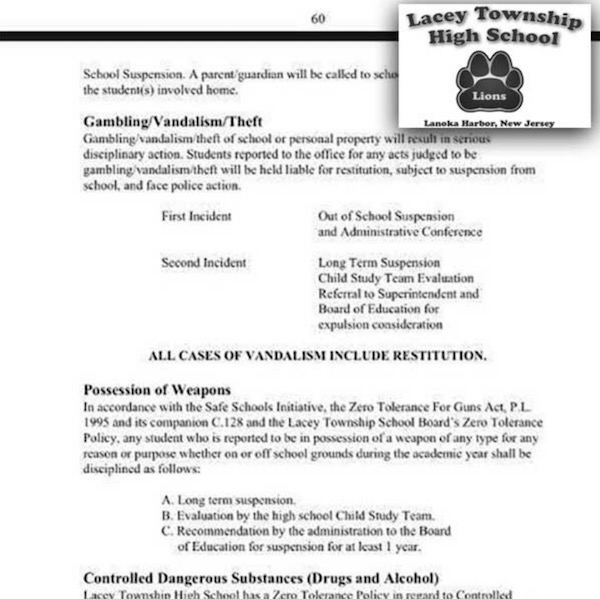 If that sounds a little bit ‘jackboot’ to you, it should.

This was over Snapchat pics of them at a private range after school.

Suspending the two boys because they posted the picture – which was taken off school grounds and unrelated to school activities on Snapchat – was a “very serious violation” of their rights, said attorney Daniel L. Schmutter.

And the organization – the Association of New Jersey Rifle and Pistol Clubs – is prepared to sue the district if the suspensions are not rescinded and the district apologizes to the students and their families, he said in a recent letter to Superintendent Craig Wigley and Principal Gregory Brandis.

“We hope they will do the right thing,” Schmutter said.

The boys have been in school this past week, but have not been allowed in class. They are both straight-A students who take some advanced placement courses, he said.

“These are top-quality kids,” Schumuter said. “It’s astonishing what they have done to these kids.”

The Lacey school district follows the Safe Schools Initiative, the Zero Tolerance for Guns Act and the district’s own zero-tolerance policy for any students who have weapons in their possession, on or off school grounds.

They are pulling honor students out of class. To punish them. For exercising their legitimate rights as a citizen.

They’re supposedly doing it “in accordance with” the Zero Tolerance for Guns Act. (Full text here.)

Does their reaction seem to be in keeping with EITHER the ‘spirit’ OR the ‘letter’ of what follows?

e. Firearms or other weapons in educational institutions.

(1)Any person who knowingly has in his possession any firearm in or upon any part of the buildings or grounds of any school, college, university or other educational institution, without the written authorization of the governing officer of the institution, is guilty of a crime of the third degree, irrespective of whether he possesses a valid permit to carry the firearm or a valid firearms purchaser identification card.

(2)Any person who knowingly possesses any weapon enumerated in paragraphs (3) and (4) of subsection r. of N.J.S.2C:39-1 or any components which can readily be assembled into a firearm or other weapon enumerated in subsection r. of N.J.S.2C:39-1 or any other weapon under circumstances not manifestly appropriate for such lawful use as it may have, while in or upon any part of the buildings or grounds of any school, college, university or other educational institution without the written authorization of the governing officer of the institution is guilty of a crime of the fourth degree.

(3)Any person who knowingly has in his possession any imitation firearm in or upon any part of the buildings or grounds of any school, college, university or other educational institution, without the written authorization of the governing officer of the institution, or while on any school bus is a disorderly person, irrespective of whether he possesses a valid permit to carry a firearm or a valid firearms purchaser identification card.

It’s time we put a stop to the selective protection of American civil rights.

We hope the judge hands down a judgment big enough to make prissy administrative thugs tremble at the mere thought of even considering taking a run at student civil rights.

And we hope anyone stupid enough to have enforced this trampling of their rights pays for it with their jobs.