While Democrats feign outrage at the efforts of foreigners to ‘influence’ our elections, here’s how they’re making their big-money hard-left agendas seem ‘organic’.

Not only are agencies like Media Matters coordinate with the SocialMedia(D) giants in releasing their ‘war plans’ for how to defeat, silence and destroy any opposition on the right…

But Bill O’Reilly shone a light on just who is showing up in an Atlanta conference with an agenda you won’t be hearing about in the ‘traditional’ news networks.

Have you heard of Solidaire? Proteus? Leah Hunt? Probably not.

Solidaire was one project set up by Proteus, which in turn is overseen by Hunt. You can see the ‘Influence Watch’  descriptions in the links to each.

Here are a few of Hunt’s connections: 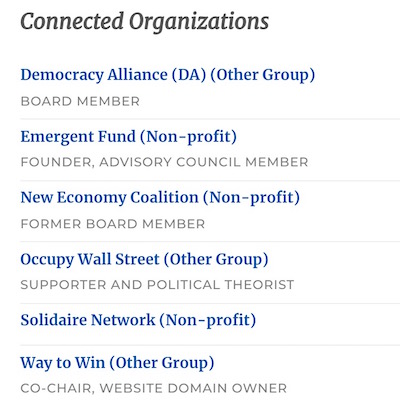 Oh… and she’s on the board at ‘Women Moving Millions’, the aforementioned Democracy Alliance, and was on the board of New Economy Coalition.

If it seems like these groups all seem to be saying the same crap, maybe that photos a clue to why that might be.

The Solidaire Network is made up of wealthy liberal donors who give money to groups and individuals who foster protest and take “direct action.” That could mean organizing sponsor boycotts, paying pressure groups to demonstrate outside a business, or even paying individuals to accuse public figures of wrongdoing. This kind of behavior has a name: Black Political Power.

Most Americans are totally unaware of this revolting strategy even though it was made public when one of the women accusing President Trump of “misconduct” had her mortgage paid. In fact, for years big money has been secretly dispersed in order to destroy people. There is an audio tape of a far left lawyer offering hundreds of thousands of dollars to a Virginia woman if she would accuse Donald Trump of “misconduct.” A close associate of mine has heard the tape and we are urging the person who has it to turn it over to a U.S. Attorney.

According to reports, the Solidaire Network has formed a “resistance” fund. It’s mandate is to combat “immediate threats” to immigrants, women, Muslim and Arab-American communities, black people, and LGBTQ communities. The fund has access to millions of dollars which means major damage can be done to anyone or anything targeted.
Source: Bill O’Reilly

‘Black Political Power’, he said. With jackboot tactics of destroying their ideological rivals.

And they’re using the money and infuence of a few political puppetmasters to make it happen.

That can’t be good.

So, continue watching out for the usual suspects like Democracy Alliance, but keep your eyes out for Solidaire and this new race-based ‘Power’ movement, too.

You can expect they’ll be doing their best to shape the Mid Terms… and not in the direction of a free and honest exchange of ideas.