Last week, life got weird. Not quite ‘sun rising in the West and setting in the East’ weird… but pretty weird.

Besides a soon-to-be iconic handshake 65 years in the making, which led to Trump being recommended for a the Nobel Peace Prize by none other than the President of South Korea (which was said in response to someone else suggesting that the Korean President deserved it), Kanye went rogue in a MAGA hat. Among other things.

He endorsed free thinking, and asking unpopular questions. Wherever Kanye eventually lands eventually, we love him for at least starting this conversation, where hopefully people won’t be called racially-charged names for daring to disagree with someone else politically.

Then Kanye doubled down, tweeting a little thing or two about history that didn’t sit well with the political Left.

It’s since been removed — but as we all know, words cannot be unspoken.

A number of sites discussed the tweet — DailyWire, TeenVogue, Billboard among others. Here’s a screenshot from DailyWire’s citation of it.

John Legend’s wife nearly had a stroke, which, to be honest, is pretty satisfying in its own right.

John Legend himself got into the conversation, too. This might have been the tweet in the thread CJ was reacting to when he decided to address both Kanye and Legend:

You just KNOW this tweet won’t go over well with those who have convinced themselves that everyone on the left is virtuous, and everyone on the right is, shall we say, a ‘basket of deplorables’. Here is the exchange, with a mic drop by someone else who got in on the fun later. 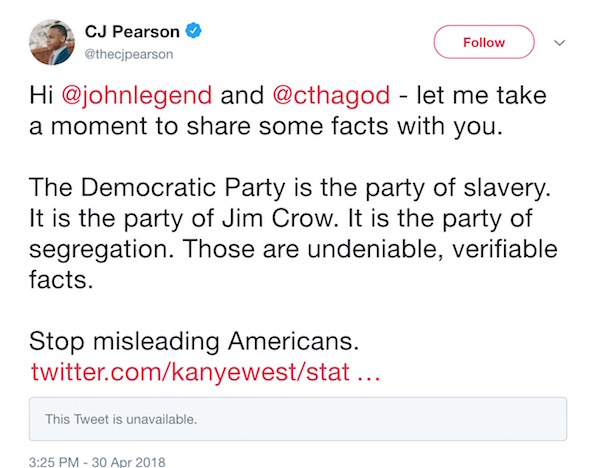 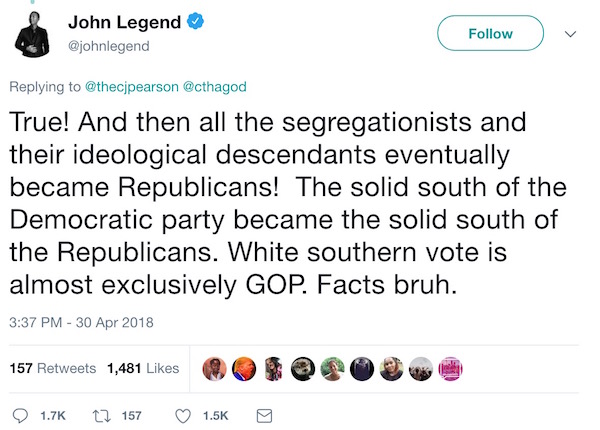 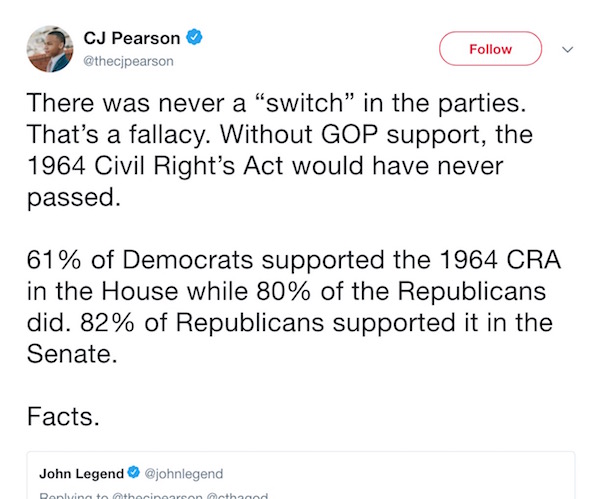 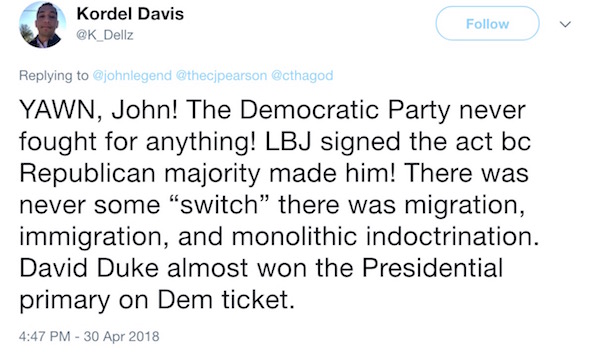 It almost makes you wonder whether anyone on the left stops to notice just how many of the passionate objectors to the Democratic talking points ‘just happen’ to have brown skin.

You might expect that would give them pause to wonder if the ‘racism’ claims were overblown.

After all, remember how they once hated Potus 43? The Dubya stands for War Criminal, they’d have you believe, back when he was in office. But now that he was on team NeverTrump? Now he’s a cuddly little teddy bear with better than 50% approval. He’s out of power, no longer a threat to the Left’s agenda, and just like that… *poof*: rehabilitated.

Maybe that’s because leftists use the politics of personal destruction as a substitute for actual political debate. And why wouldn’t they? It can be a devastatingly effective, although totalitarian tactic, (just ask the old CEO of Mozilla).

There was some pushback from various sources explaining why they thought the switch might really have happened. But they’ve got one little problem. It’s those ‘facts, bruh’.

Here are two contributors who have taken on the subject, with a view of history and specific citations, instead of sweeping generalizations.

First, we have a video from Carol Swain, a Professor of Political Science and Law at Vanderbilt University addressing that claim. (Spoiler: the claim of the ‘Switch’ is false.)

Maybe you prefer a second source. Dinesh D’Souza mentions specific acts where Republicans — even Nixon, who Dinesh acknowledges is privately muttering all kinds of words one would never say today — drove policy that, when choosing between white exclusion and black inclusion, sided with black inclusion.

Nixon, for example, threatened Philadephia unions (white-only) with being cut off from Government contracts unless they began hiring non-white workers.

In case you’re taking John Legend seriously…
we would reply with the same answer John gave.